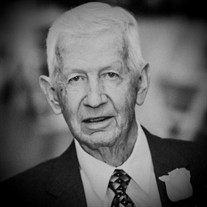 James Vann Pettigrew, 89, was born in Whiteville, Tennessee on November 23, 1931. He passed away peacefully on Sunday, October 31, 2021, at Jackson-Madison County General Hospital. He was the son of the late Olivia Norment Pettigrew and I. E. Pettigrew, Sr. and was preceded in death by brothers I. E. (Snooks) Pettigrew, Jr. and Kent Pettigrew, and infant son Phillip Wayne Pettigrew. He was married for 67 years to Dorothea Cooper Pettigrew who survives. In 1950, Mr. Pettigrew graduated from Whiteville High School and worked briefly for the NC and St. L Railroad. That same year he joined the Tennessee National Guard in Bolivar where he served for 7 years. His 41 year industrial career began at International Shoe Co. where he was an Industrial Engineer and Safety Director trainee. Several years later, he accepted the position of Personnel Director at Jervis Corp. and then the Master Slack Corp. In 1973, he rejoined Jervis Corp. (then known as Harmon Automotive) as the Human Resources Manager. Twenty years later after a 2 week retirement from Harmon, he began working for the state of Tennessee as an Employer Relations representative with the Tennessee Dept. of Labor and Work Force Development, a job he greatly enjoyed as he traveled the state and made many new friends. At the age of 21, Mr. Pettigrew was ordained as one of the youngest elders in the Cumberland Presbyterian Church, serving first the Whiteville church and then the Bolivar church until his death. Some of his most fond memories included attending the church’s youth camps at Camp Clark Williamson. Before moving to Bolivar in 1963, Mr. Pettigrew was elected to the Whiteville Board of Alderman which was the beginning of a lifelong service to the community. He was a Hardeman County Commissioner for 18 years, on the Bolivar Utility Board for 15 years, on the Hardeman County Industrial Board for numerous years, and on the board of First South Bank for 20 years. He helped organize the Bolivar Jaycees as well as the Bolivar Civitan Club in which he served as the first president. After serving as the Chairman of the Board of Directors for the West Tennessee Heart Association, Gov. Winfield Dunn appointed him to the first Health Facilities Commission. Later, Gov. Ned McWherter appointed him to serve as a member of the Tennessee Personnel Recruiting Services Board. He also served on the Quinco Mental Health Association Board for 36 years, the Advisory Board for Whiteville Area-Vocational Technical School, the Hardeman County Arts Council and the Hardeman County Chamber of Commerce Board of Directors. He was instrumental in organizing United Fund in Hardeman County for which he received the Pioneer Award. He was on the Hardeman County Grand Jury for 10 years before serving as Grand Jury Foreman, and also served as the Coordinator for the E. S. G. R. for the West Tennessee area. Mr. Pettigrew was a true Southern Gentleman who loved his family, church, and community. He had a love for people and rarely met a stranger. He enjoyed fishing, family vacations, spending time at the family farm, watching westerns, and drinking coffee with his friends. However, his most enjoyment came when his grandchildren and great-grandchildren visited. Survivors include his daughter Carol Pettigrew Yates (Eddie), two sons Mark Pettigrew (Jo Anne) of Bolivar and Greg Pettigrew (Sonya) of Jackson; seven grandchildren, Carrie Yates Schlick (Jason) of Chapel Hill, Tennessee, Jenny Yates Kolka (Seth) and Cooper Yates (Callie) of Murfreesboro, Tennessee, Eric Pettigrew (Chelsea) of Jackson, Tennessee, Kyle Pettigrew of Bolivar, Josh Pettigrew (Kirby) of Nashville, Tennessee and Rachel Pettigrew Frazier (Matthew) of Jackson, Tennessee, and 10 great-grandchildren. The family requests that memorials be sent to the Hardeman County Arts Council and the American Heart Association.

James Vann Pettigrew, 89, was born in Whiteville, Tennessee on November 23, 1931. He passed away peacefully on Sunday, October 31, 2021, at Jackson-Madison County General Hospital. He was the son of the late Olivia Norment Pettigrew and I.... View Obituary & Service Information

The family of Vann Pettigrew created this Life Tributes page to make it easy to share your memories.

James Vann Pettigrew, 89, was born in Whiteville, Tennessee on...

Send flowers to the Pettigrew family.