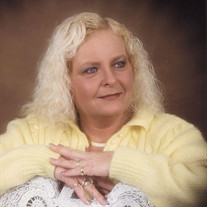 VICKEY EVANS CROWE Henderson, TN: Vickey Joyce Sanders Evans Crowe age 61, passed away September 24, 2020 at her home. She was born February 26, 1959 in Covington, TN and grew up at Hornsby, the daughter of the late Robert Hughey Sanders, Sr. and Joyce Ann Tims. She was raised by her step-mother, Sarah June Sanders. She attended school in Bolivar. She worked at factories while raising her children. Her most recent work was at The Market in Henderson. She married Ronnie Crowe in 2010. They made their home near Silerton. She enjoyed watching her grandsons play ball and she also enjoyed watching sports on TV. She liked having all of her family around. Mrs. Crowe is survived by her husband, Ronnie Howell Crowe; two daughters, Yolanda Smith (Sonny) of Lexington and Candace Crouse (Bradley) of Henderson and a daughter-in-law, Crystal Preslar of Henderson; ten grandchildren and one great grandchild; five brothers, Donald Sanders of Fort Payne, AL, Robert Sanders, Jr. of Toone, Terry Sanders of Bolivar, Daniel Prince of Gary, TX and Ronney Prince of Waskom, TX and three sisters, Teresa Benard of Henderson, Debra Downing of Gary, TX and Karen Green of Carthage, TX. She was preceded in death by her parents, one son, Shawn Preslar (Feb. 2020) and a grandchild, Johnny Smith. Funeral services will be 3:00 PM Sunday, September 27th at Shackelford Funeral Directors – Crook Avenue with Bro. Aaron Moss officiating. Burial will follow in Walnut Grove Cemetery in Hardeman County, TN. The family will receive friends at Crook Avenue 10:00 AM Sunday until service time at 3:00 PM. Shackelford Funeral Directors of Henderson 731-989-2421

The family of Vickey Evans Crowe created this Life Tributes page to make it easy to share your memories.

Send flowers to the Crowe family.