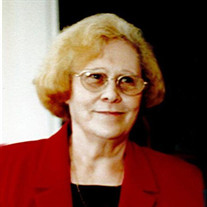 WANDA SQUIRES Henderson, TN: Wanda Squires, age 90, passed away Saturday, March 26, 2022 at Henderson Health and Rahab. She was born October 25, 1931 in Stantonville, TN, the daughter of the late O.D. and Emmer Eller Romaine Hockaday. She helped raise her siblings after her mother passed away. She worked in a factory at Clifton and after moving to Whiteville she baby sat. She had made her home in Henderson with her daughter, Wanda the past year and a half. She is survived by her daughter, Wanda Kitchen of Henderson; six grandchildren; Ken, Jr., Stacy Leigh, Chris, Shonda, J.J., and Shane; and eight great grandchildren. She was preceded in death by a son, James Carl Kirk in 1981; five brothers, Carl Hockaday, Gillis Hockaday, Archie Hockaday, Junior Hockaday, and an infant brother; and two sisters, Jewell Leonard and Lena Mae Parker. Graveside services will be 11:00 AM Tuesday, March 29th at Melrose Cemetery in Whiteville with Chris Kitchen officiating. Shackelford Funeral Directors of Henderson 731-989-2421

The family of Wanda Squires created this Life Tributes page to make it easy to share your memories.

Send flowers to the Squires family.