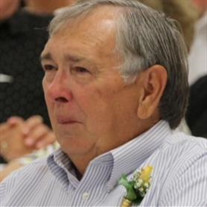 Donald Wayne Kirk was born April 23, 1943 in McNairy County, TN the son of the late Allen (Kenny) McKinley Kirk and Goldie May Nixon Kirk. He departed this life on February 20, 2022 in Memphis, Tennessee at the age of 78 Years, 9 Months, 28 Days. He was united in marriage to Patsy Lee Holland on August 8, 1964. He served this country in the Army National Guard from August of 1963 until September of 1969. He also served as a City of Memphis Police Officer for 30 years and retired as Captain in 1995. Before he passed away, Wayne told his wife, "Don't make a big deal about my job, I'm not a hero". Well, he was completely wrong about that. He is a hero. Wayne was an avid outdoorsman who originally learned the art of hunting and fishing out of necessity to survive would eventually be blessed with the opportunity to enjoy it as a hobby. He loved to catch the big fish, harvest the trophy buck or simply outsmart the fox. He wouldn't admit it, but he loved to brag about it. He couldn't wait to pull out that old Polaroid to get a picture of the big fish he had just caught so that he had proof to back up his story at the liars table at Taylor's Grocery in Pocahontas. He was most at home in the middle of the woods or in a boat in the middle of a lake or river. As much as he loved to catch fish, Wayne loved to cook and eat them even more. He Loved to have a fish fry in his shop at home and have his family and friends over to eat. Between his fish and moms hushpuppies, they became well known for providing some of the best food around. Wayne loved to garden. He grew and harvested acres of purple hull peas by hand. He grew the biggest watermelon and cantaloupes to give away to his friends. He would keep up with how many quarts his strawberry patch would produce each year. He also grew peonies that originated from his mother's plants. Mr. Kirk was a hardworking man. At 78 years old, his work boots sat ready to go lying on the doorstep. His body was tired and worn out, but he never backed down when there was work to be done. He took pride in making sure that he taught his boys to have the same work ethic so that they would always be able to support their families. One of his sons once said, "We hated our daddy because he made us work all the time as kids and now we hate him because working is all that we know how to do". Rest in Peace Wayne and go catch the big ones. We Love You! He is survived by his wife Patsy (Pat) Lee Kirk of Pocahontas, TN; two sons, Jeffrey Allen (Jeff) Kirk and wife Jackie of Middleton, TN, Donnie Joe Kirk and wife Karrie of Selmer, TN; two sisters, Sue Arnwine of Pocahontas, TN, Betty Locke of Pocahontas, TN; a brother, Terry (T. M.) Kirk and wife Debbie of Lawton, TN; five grandchildren: Jennifer Miller and husband Michael of Ripley, MS, Brittney Kirk and fiancé Tyler Melton of Memphis, TN, Kaitlin Kirk, Tanner Kirk and Tucker Kirk all of Selmer, TN; two great grandchildren, Kaylee and Cole Miller of Ripley, MS; and a host of other relatives and friends. In addition to his parents, Mr. Kirk was preceded in death by his brothers-in-law, Bobby Arnwine and Eugene Locke. Memorials in lieu of flowers may be made to the Alzheimer's Association.

Donald Wayne Kirk was born April 23, 1943 in McNairy County, TN the son of the late Allen (Kenny) McKinley Kirk and Goldie May Nixon Kirk. He departed this life on February 20, 2022 in Memphis, Tennessee at the age of 78 Years, 9 Months, 28... View Obituary & Service Information

The family of Wayne Kirk of Pocahontas, TN created this Life Tributes page to make it easy to share your memories.

Send flowers to the Kirk family.