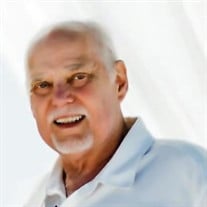 ** A memorial reception will be held from 2-4 pm, Saturday, November 6, 2021 at Papa Daddy's Restaurant,1704 TN-138, Mercer, TN.** Donald Wayne Lax, 69, of Bolivar, passed from this life on February 12, 2021 at Baptist Memorial Hospital in Memphis, TN. He was born in Somerville, TN to Joseph Brooks and Elizabeth Gale Glidewell Lax on December 19, 1951. They moved to Chicago around 1956 and there Wayne graduated from Kennedy High School before attending Tarrant County Junior College for two years. Wayne served in the United States Air Force from 1976 - 1979. He was an E-2 at Kadena Air Force Base in Okinawa, Japan. He was married to Betty Ruth Lewis (Dellinger), at Gatlinburg, TN, in June of 1993. He worked for Troxel Manufacturing for nearly 30 years as a machinist. Wayne was an avid musician , playing keyboards and guitar in many bands throughout his life. He also enjoyed playing golf. A long-time member of the Middleburg Baptist Church he had recently moved his membership, to attend alongside his wife Betty, at Maple Springs Baptist Church. In addition to his wife, Wayne is survived by a daughter, Brandy Adams and husband Jonny of Arlington, TX; three sons, David Lax and wife Alecia of Nashville, Joe Brooks Lax of Antioch, IL, and Major James Lax and wife Anna of Thailand; two sisters, Linda G. Watkins and husband Wayne of Bolivar, and Sandra Vandenburgh and husband Jim of Wilmington, IL; a brother-in-law, Tommy Payne of Jackson, MS; and four grandchildren, Finley, Reese, Aidan and Ethan Lax. He was preceded in death by his parents, twin infant brothers Terry & Jerry Lax, a sister Anita ('Nita) Payne and his twin brother Dwayne Lax.

The family of Wayne Lax created this Life Tributes page to make it easy to share your memories.

** A memorial reception will be held from 2-4 pm, Saturday, November...