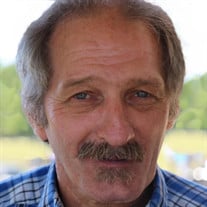 Wendell William Gilchrist was born October 30, 1958 in Memphis, TN. The son of Billy Evon Gilchrist and Patsy Marie Harrison Gilchrist. Wendell was a wonderful husband and father. He was a hard worker and enjoyed working in his yard. Wendell... View Obituary & Service Information

The family of Wendell William Gilchrist of Adamsville, TN created this Life Tributes page to make it easy to share your memories.

Send flowers to the Gilchrist family.