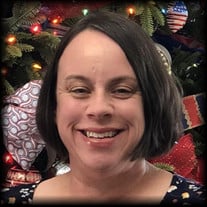 Wendy Michele Roller was born in Ft. Rucker, Alabama to Hebern and Christa Roller on April 27, 1973. She graduated from Daleville High School in 1991. She attended Judson College from 1991-1993 and completed her studies at Troy State University in 1995, earning a B.S in Nursing. She went to work at Southeast Alabama Medical Center and then returned to Troy University to earn her Master’s Degree and Nurse Practitioner certification. After that achievement, she took a job at the VA Clinic in Dothan, AL. During high school, college, and for several years after Wendy competed at a high level in 3-day horse eventing, show jumping, and dressage. She also began raising and training Border Collies and Australian shepherds with her father Hebern after becoming a nurse. In 2010 Wendy purchased a farm in Middleton, Tennessee, and transferred to the VA Clinic in Bolivar, TN. While working full time she continued to raise and train Border Collies and was very active in state and local herding organizations. She also began to raise dairy cattle, heritage breed chickens and pigs as well as sheep. Everyone who purchased one of her dogs or other animals knew they would get a quality animal with impeccable breeding and training. In 2013 Wendy left the VA and joined the Hardeman County Family Clinic as a Nurse Practitioner. Colleagues from all of her jobs all attest that she was well-loved by her patients and was always first and foremost a caring and professional nurse. Wendy particularly enjoyed working with the children at the family clinic. In 2015 Wendy suffered the first in a series of strokes and health incidents. She was forced into retirement from nursing but threw herself into her farm work, her dogs, canning and preserving, and gardening. Anyone who followed her on social media knows she got more done on a lot of her bad days than many do on a good day. Wendy passed away from a stroke on May 17, 2021. She was preceded in death by her father Hebern and is survived by her mother Christa, her sister Olivia (Christy), her aunt Roswitha (Bernhard), her uncle Josef, her half-brother Rick (Linda), her half-sister Pam, 4 nieces and nephews, and many cousins. A private memorial will be at her farm in Middleton, TN at a later date. In lieu of flowers please donate in her honor to Heifer International and Border Collie Rescue of West TN. “When I am exhausted beyond words, tired beyond measure, I wonder again I've got the stuff to farm. Then I watch my pastures light up with fireflies dancing and I remember why I chose land over apartment. My soul is full. That'll do dogs, it will all be here tomorrow. Dance fireflies. Dance.” Wendy Roller

Wendy Michele Roller was born in Ft. Rucker, Alabama to Hebern and Christa Roller on April 27, 1973. She graduated from Daleville High School in 1991. She attended Judson College from 1991-1993 and completed her studies at Troy State University... View Obituary & Service Information

The family of Wendy Michele Roller created this Life Tributes page to make it easy to share your memories.

Send flowers to the Roller family.