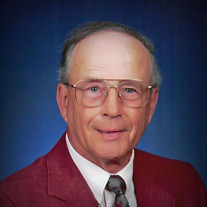 Mr. Strope departed this life on Wednesday, March 17, 2021 at Baptist Hospital in Collierville. A native of South Bend, Indiana, Mr. Strope moved to Bolivar from Ohio over 50 years ago and was retired as Purchasing Manager for Troxel Manufacturing in Moscow, TN. While there, he also served as safety director and in sales. He was the son of the late Walter James and Bertha Irene Sousley Strope. Additionally, he was preceded in death by a daughter, Lori Ann Strope; an infant sister and one other sister, Kathleen Worley; and a brother, Robert Strope. Baptized into the Lutheran church, Mr. Strope was a member of the Bolivar First United Methodist Church where he sang in the choir for 50 years. His love for music led him, also, to sing at numerous weddings and funerals over the years. He served his country in the US Army at Ft. Gordon in Augusta, GA and there he met his future wife, the former Shirley Daniel. They were united in marriage on October 9, 1954. Mr. Strope served as a military policeman and attained the rank of Corporal. Mr. Strope was an avid golfer who played at least three times a week. He also passed his love of the game on to his children, grandchildren and great-grandchildren. He was, at one time, active with the Hardeman County Arts Council where he sang and acted in several productions. He and his wife loved to travel, as well. Among their noted destinations were the Holy Lands and Hawaii. In addition to his wife of over 66 years, he leaves his daughter, Kimberly A. Sain and her husband, Jimmy, of Bolivar; his two sons, Dennis R. Strope and Stephen J. Strope and his wife, Margaret Ann, both of Bolivar; a brother, Larry Strope of Steamwood, IL; seven grandchildren and 10 great-grandchildren. Memorials may be sent to Bolivar First United Methodist Church; St. Jude Children's Research Hospital; or the charity of the donor's choice. ** THE FAMILY OF MR. STROPE RESPECTFULLY ASKS ALL THOSE ATTENDING THE GRAVESIDE SERVICE, PLEASE WEAR A MASK OR FACIAL COVERING AND PRACTICE SOCIAL DISTANCING. THANK YOU. **

Mr. Strope departed this life on Wednesday, March 17, 2021 at Baptist Hospital in Collierville. A native of South Bend, Indiana, Mr. Strope moved to Bolivar from Ohio over 50 years ago and was retired as Purchasing Manager for Troxel Manufacturing... View Obituary & Service Information

The family of William H. "Bill" Strope created this Life Tributes page to make it easy to share your memories.

Send flowers to the Strope family.