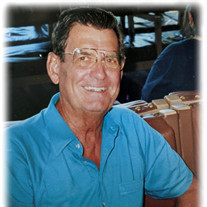 William Donald McGahan was called home to the Lord on Sept. 2, 2021 in Waynesboro, TN at the age of 86. He was born on Nov. 29, 1934 in Somerset, Kentucky where he later graduated from Somerset High School. He proudly served in the United States Navy as a Machinist Mate Second Class Petty Officer. After his service in the Navy, Don moved to Nashville to attend printing school at the University of Tennessee, Nashville Extension, and Belmont’s College of Business. It was in Nashville that he met his wife and the great love of his life, Charlene, in 1956. He began his printing career at Methodist Publishing House in Nashville where he worked for fourteen years, first as an Operations Manager, and then becoming a Systems Engineer, coordinating computer installations and training users in newspaper operations. Don was an award-winning Production Operations Director and Consultant at newspapers in Tennessee, South Carolina, Florida and Alabama. He retired twice in his more than forty-year career; first from The Tennessean in Nashville, and again from his last position at the Times Daily, a New York Times regional newspaper in Florence, Alabama. Don was a faithful member of his community in many capacities: a member of Kelley’s Chapel Baptist Church, a Kentucky Colonel commissioned by Governor John Y. Brown, and a Mason and Past Master of Observance Lodge, 686 F & AM, Nashville, TN. Following retirement, Don and his loving wife of 65 years, Charlene, spent their days together on a farm on the Buffalo River in Waynesboro, Tennessee, entertaining many friends and family and teaching their grandchildren the simple pleasures of country living. As hobbies, Don enjoyed golfing and woodworking. He is preceded in death by his father Alonzo McGahan, mother Vita Chaney McGahan, son Mark Alan McGahan, sister Evelyn Groseclose, and his brother Samuel McGahan. He is survived by his wife Charlene Staggs McGahan, sons William Michael McGahan and Kelley Donald McGahan, three granddaughters and seven great-grandsons. Don had a gentle and kind spirit that touched everyone who met him. He will be deeply missed by many. The visitation and funeral will be held on Sunday, Sept. 5 at 3 p.m. at Wayne County Memory Gardens in Waynesboro, TN. In lieu of flowers, donations can be made in Don's memory to the Michael J. Fox Foundation for Parkinson’s research.

William Donald McGahan was called home to the Lord on Sept. 2, 2021 in Waynesboro, TN at the age of 86. He was born on Nov. 29, 1934 in Somerset, Kentucky where he later graduated from Somerset High School. He proudly served in the United... View Obituary & Service Information

The family of William Donald "Don" McGahan created this Life Tributes page to make it easy to share your memories.

William Donald McGahan was called home to the Lord on Sept. 2,...

Send flowers to the McGahan family.