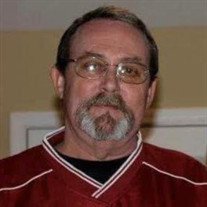 William "Billy" Ticer departed this life on Sunday, December 13, 2020, at the age of 66 years, 5 months, and 29 days. He was born in Florence, Alabama on June 14, 1954, the son of the late Loyd and Geraldine Matheny Ticer. In 1970, he moved to Savannah, Tennessee and called it home. On December 29, 1973, he was united in marriage to Brenda Lambert, who survives. He worked for over 30 years at Aqua Glass in the Special Projects Division. Billy enjoyed watching University of Alabama football, loved to fish, golf, and rock climb. He also enjoyed camping, traveling, going on quests, and was a big history buff. Billy is survived by his wife of 47 years, Brenda Ticer of Savannah, Tennessee; daughters, Heather Nicole Ticer Ashe and her husband Scotty of Selmer, Tennessee, and Crystal Oldham and her husband Shane of Boca Raton, Florida; grandchildren, Ana-Grace Ashe and her fiancé Beau Barnes, Abagail Ashe, and Layla Oldham; brother, Lynn Ticer of Olive Hill, Tennessee, and sister, Gail Ticer Burgess and her husband Danny of Whiteville, Tennessee. In addition to his parents, Billy was preceded in death by his brother, Tony Ticer. The family requests that masks be worn, and social distancing be practiced at both the visitation and the funeral service.

The family of William "Billy" Ticer created this Life Tributes page to make it easy to share your memories.

Send flowers to the Ticer family.