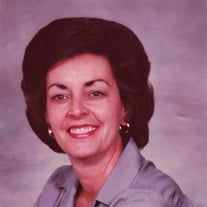 Mrs. Doris Jean Robinson Teague, 83, devoted wife, cherished mother, adoring grandmother, daughter, sister, sister-in-law, aunt and loyal friend died peacefully on January 20, 2021 at Henderson Health and Rehab Center as she released the hand of her loving husband and took the hand of God. Doris was born July 17,1937 in Memphis, Tennessee to Clyde Merlin Robinson and Alma Hawkins Robinson. Her family moved to Jackson, Tennessee, when Doris was 13. She graduated from Jackson High School in 1955 and attended Lambuth College where she pledged Alpha Omicron Pi sorority. .She married James Benton “Jimmy” Teague in 1958 and they made their home in Jackson where they raised 3 sons, Jeff, Andy and Sam Teague. Doris worked for South Central Bell Telephone Company where she was a member of the Pioneer Club. She retired after 20 years of service and later worked for Jackson Energy Authority for 10 years. She was a very active member of Malesus United Methodist Church which she loved dearly serving as Sunday School teacher and working with the Youth for many years. She was also an officer in the Jaycettes. Doris loved people. Their home was always a welcoming place for friends and family and especially friends of her boys. She always had a listening ear and limitless love for family and friends. Just about the time life started to settle down, here came the loves of her life – the grandchildren. What a blessing and the answer to many prayers. Preceding her in death, in addition to her parents, were a beloved brother and sister-in-law, Billy Joe and Doris June Robinson. Survivors include her husband, Jimmy Teague; sons, Jeff(Kim), Andy (Tonjua) and Sam Teague; grandchildren Lindsey (David) Owens, Ripley (Dane) Owens, Tyler (Trenity)Teague, Elizabeth (Matthew) Nelson and David Dexter; special lifelong friends, Joe and Sandra Fielding and many nephews and nieces and in-laws. In lieu of flowers memorials may be made to: The Pat Summitt Foundation 520 W. Summit Hill Drive Suite 1101 Knoxville, TN 37902 or Malesus United Methodist Church 448 Old Malesus Rd Jackson TN 38301

The family of Doris R. Teague of Jackson, TN created this Life Tributes page to make it easy to share your memories.

Send flowers to the Teague family.