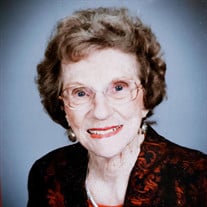 Ruth Phillips Nichols, born August 14, 1924 in Stantonville, Tennessee, and former resident of Orangeburg, South Carolina, entered into her heavenly home on June 9, 2020. At the time of her passing, she resided in a Continuing Care Retirement Community near family members in Rancho Bernardo, a suburb of San Diego, California. Administration and her care team at Casa de las Campanas, in addition to the many residents who knew Ruth as their friend for eight years, have expressed in different ways just what Ruth meant to them, and join with the family in the loss we all are presently experiencing. The same is true of professional colleagues, former students, and dear neighbors and other friends Ruth met along life’s long path. Education embraced Ruth as she embraced it. It was a central focus in her academic pursuits at the University of Tennessee, where she earned a Bachelor’s Degree and later a Master’s Degree at the University of South Carolina. In that Ruth so endeared herself to academics, she devoted many years as an elementary school teacher, instilling that same passion in hundreds of children. Many contacted her in the years following to express their genuine appreciation at the same time they shared stories of their professional and life successes. Beauty, we understand, is in the eye of the beholder. The consensus is that Ruth embodied much more than a physical attraction, she radiated enthusiasm about life replete with humor and easy teasing which everyone admired. When people left her company, they typically felt much better about themselves. One aspect of Ruth’s beauty she permitted self-indulgence and gushed over up to the last weeks of her life – was a passion for clothes. Not just in your ordinary wear, but an unsurpassed expertise in quality and color coordination to serve as wrappings of her inner strength and physical attractiveness. A sterling trait Ruth reflected first and foremost within her core values was her love of the Lord that often found expression in commitment to service in His name. One example- among many - was assuming leadership positions on various church committees over the years. Volunteering suited her well – the latest example was ministering to residents in the Memory Care Unit of Casa de las Campanas in the years prior to herself becoming a resident of that same facility. Ruth was preceded in death by her parents, William Reid and Mary Elizabeth Phillips, her husband, Cason Nichols, Jr., two sisters Mary Murdaugh and Jewel Miller, and her granddaughter, Elizabeth Grier Duarte. She is survived by her sister Naomi Chance of Memphis, TN., her daughters Janet Whitney (Eli) of Peoria, AZ., Lib Alston (Bob) of Loudon, TN., son Nick Nichols of Escondido, CA., granddaughter Sara Pfeifer, great granddaughter Sophia Duarte, and a niece and several nephews. A private graveside service will be held in Stantonville Cemetery in Stantonville, Tennessee. Shackelford Funeral Directors of Selmer, TN. Donations may be made to the casafoundation.org.

Ruth Phillips Nichols, born August 14, 1924 in Stantonville, Tennessee, and former resident of Orangeburg, South Carolina, entered into her heavenly home on June 9, 2020. At the time of her passing, she resided in a Continuing Care Retirement... View Obituary & Service Information

The family of Ruth Nichols created this Life Tributes page to make it easy to share your memories.

Send flowers to the Nichols family.