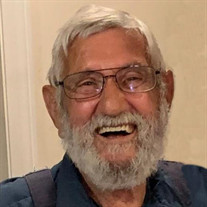 Billy Harold Burney of Selmer, TN, was born on December 7, 1941 to Willie Franklin and Willie Athelea Whitten Burney and departed this life on December 8, 2021 at the age of 80 and 1 day. He joked that two countries were fighting over him because he was born about 7:30 a.m. on what would become known as Pearl Harbor Day. Billy lived an interesting and full life. He loved to travel the country, visiting all but five States and he never met a stranger. When his family was asked if they had talked with him lately, they would jokingly respond, “No, but we listened to him for about a half an hour the other day.” He grew up and lived most of his life, prior to marriage in Purdy, Tennessee picking cotton and helping his father farm. In high school, he spent two years in Memphis attending Humes High School and lived in the same apartment complex as Elvis Presley. Billy often told the story of Elvis asking Billy and his friends to go to the corner store to buy Elvis a Coca Cola or help push his motorcycle. He graduated from Bethel Springs High School in 1959. Billy was a Jack of all trades. He could fix just about anything or figure out a way to make something that met his needs. In 1971, he lost a finger in a work accident and for years, whenever he had a problem he would squat, grab his face in his signature fashion, and “study,” prompting good friends to tease him about removing his finger from his nose. He was a wealth of knowledge and always loved watching television programs that educated him or let him travel to places he had never seen. His lifelong love of cars began because he wanted to understand how an engine worked. He always said he tore down and rebuilt his first engine at the age of twelve. In his early years, he raced his 1957 Sedan Delivery and won many first-place trophies. He was a member of the Shiloh Area Street Rod Association and his pride and joy was a 1937 Chevrolet. Eventually, rebuilding wrecked Corvettes became his passion and he built and ran his own shop for many years. Billy always had a heart for helping others, for his community and his country. He served many years in public life as the Chairman of the Selmer Planning Commission, the Board of Zoning Appeals and as a volunteer fireman, first responder, and a member of the Purdy Masonic Lodge #132. He was also always involved in politics as a member of the Republican committee in Selmer, attending gubernatorial inaugurations and meeting many of the State’s elected officials. He even made a bid for the Tennessee House of Representatives only losing by a narrow margin. In 2017, Billy, Peggy and Rachel moved to Smyrna, Tennessee to be closer to family. His love of travel led him to become a member of Top Hat Metal Works with his son and grandson. “Pops”, as he became known, delivered chimney caps to Knoxville, Charleston, Milwaukee, and several other locations. Everyone loved Pops. He was preceded in death by his parents, his sister Barbara Kay Burney, his brother Max Ray Burney, and a niece Glenda Harris. He is survived by his wife of 53 years, Peggy; his children Wesley and wife Wendy of Smyrna, Tennessee, Sallye (Sissy) of Falls Church, Virginia, and Rachel of Smyrna, Tennessee; one grandchild, Dylan (Mr. D) of Smyrna, Tennessee; a nephew Arlus and wife Shelley and two nieces, Barbara Story and husband John Robert of Purdy, Tennessee and Brenda Harris of Bakersfield, California.

Billy Harold Burney of Selmer, TN, was born on December 7, 1941 to Willie Franklin and Willie Athelea Whitten Burney and departed this life on December 8, 2021 at the age of 80 and 1 day. He joked that two countries were fighting over him because... View Obituary & Service Information

The family of Billy Burney of Selmer, Tennessee created this Life Tributes page to make it easy to share your memories.

Send flowers to the Burney family.