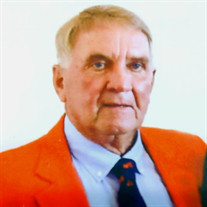 David Seaton, a long time native of Hardin County, departed this life on Saturday, April 30, 2022, at the age of 80 years and 16 days. He was born in Bristol, Virginia on April 14, 1942, to the late Con and Louise Allison Seaton, while the family was traveling and working for TVA. On June 19, 2019, he was united in marriage to Sue Duncan, who survives. David was preceded in death by his late wife of 51 years, Linda Mae Frederick Seaton. They have 3 children: Derick Seaton and his wife Pamela, Stacie Doyle, and Chris Seaton, all of Savannah, Tennessee; 8 grandchildren, Corey Seaton, Ryan Seaton, Tyler Seaton, Nikki Doyle, Kelsie Doyle, Journie Seaton, Makenzie Seaton, and Maggie Mae Seaton; 5 great grandchildren; and brother-in-law. Charles "Chuck" Frederick. He was also preceded in death by infant grandson Justin Dale Doyle. Additionally, David was preceded in death by his sister Bobbie Sue Anderson and Richard “Pete” Anderson. David was probably best known for his Loyalty, Work Ethic and Caring for his family and friends. Throughout his 80 years he accomplished many things. As a young man he was raised on the farm, tending to cattle, row cropping and helping his father show Walking Horses. After High School, he and long-time friend Dennis Williams joined the United States Marine Corp in 1961, on the “buddy-system”. Sgt. David Seaton served 5 years and is a decorated Vietnam War veteran. Afterwards, he returned to Tennessee and managed the Weakley County Farmers Co-Op until returning to Savannah in 1971. He went back to farming and worked with the local Soil Conservation Office. In 1976 he was elected Sheriff and served 4 terms until 1988. He later went on to Manage Inside-Out Hardware in Pickwick and finally, happily finished his employment career as a Foreman at Roach’s Sawmill here in Savannah. Besides his John Deere tractor, lawnmower, and any opportunity to get outside, David loved his family and friends (too many to count). His blood was “Orange” and loved the trips to University of TN Ballgames. And probably mostly, he cherished a place called “Slick-Rock”. He’ll be missed by many. Memorial donations may be made to the Darryl Worley Cancer Treatment Center, 935 Wayne Road, Savannah, TN 38372.

David Seaton, a long time native of Hardin County, departed this life on Saturday, April 30, 2022, at the age of 80 years and 16 days. He was born in Bristol, Virginia on April 14, 1942, to the late Con and Louise Allison Seaton, while the family... View Obituary & Service Information

The family of David Seaton created this Life Tributes page to make it easy to share your memories.