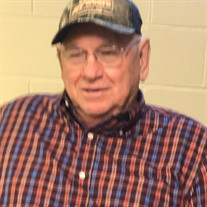 Andrew Martin was born June 11, 1944 in McNairy County, TN the son of the late James Edgar and Violet Mae Leatherwood Martin. He was united in marriage to Linda Lou Blankenship on June 29, 1963. Andrew graduated from Ramer High School. He and his wife Linda lived in Memphis for approximately 6 years, where Andrew worked as an air conditioner repair specialist for Sears. After returning to McNairy County he worked for Sears in Corinth for another 5 years. Andrew also worked for General Electric in Selmer, drove an eighteen wheeler, and worked as a tour bus driver, but for the last 20 years he and his wife Linda operated their own business, Martin Grill Gadget. Andrew invented his "grill gadget" in 1981 and used it for 20 years before realizing he had something that would be of benefit to a lot of other people. He applied for a U. S. Patent and began selling his gadget at craft shows all around the country and online. Riding motorcycles, woodworking and working with his hands, doing yardwork, riding his tractor, and traveling with his wife Linda in their R. V. were among Andrew's favorite activities. He had a natural sense of humor and a genuine interest in and love for people; he made everyone feel better by taking the time to talk with them and listen to their stories. He gave away many of his gadgets to those he met along the way who served their country. Andrew loved his church family and his earthly family, especially his grandchildren and great-grandchildren. He was a faithful member of the Antioch church of Christ. Andrew departed this life on February 2, 2022 in Memphis, Tennessee at the age of 77 Years, 7 Months, 22 Days. He is survived by his wife of 58 years, Linda Lou (Blankenship) Martin of Ramer, TN; a daughter, Cammy Evans and husband John of Covington, TN; a son, Todd Martin and wife Tina of Ramer, TN; five grandchildren: John Evans and wife Tessa, Ben Evans, Andrew Evans, Austin Martin and wife Allison, and SarahAnne Martin; two great-grandchildren, Lily Evans and William Michael Evans; four sisters: Lillie Emerson and husband David of Montezuma, TN, Dorothy Winters of Ramer, TN, Tommie Carter and husband Albert of Pocahontas, TN, and Shirley Wren and husband Larry of Ramer, TN; a brother-in-law, J. V. Carter of Pocahontas, TN; and many extended family and friends. In addition to his parents, Andrew was preceded in death by four sisters: Iller Teague, Midge Thomas, Hattie Baker, and Elizabeth (Bug) Carter; and two brothers, Ab Martin and Pete Martin. Memorials may be made to the Antioch church of Christ Cemetery fund or a charity of the donor's choice.

Andrew Martin was born June 11, 1944 in McNairy County, TN the son of the late James Edgar and Violet Mae Leatherwood Martin. He was united in marriage to Linda Lou Blankenship on June 29, 1963. Andrew graduated from Ramer High School. He... View Obituary & Service Information

The family of Andrew Martin of Ramer, TN created this Life Tributes page to make it easy to share your memories.