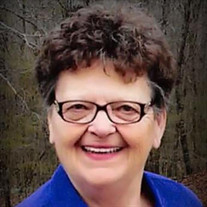 Betty McMahan, 76, of Hornsby, passed away Monday morning, January 11, 2021 at her home. She was born in Dallas, TX on Tuesday, July 11, 1944 to the late Randolph and Cecilia Clopton Snider and had lived in Hardeman County since 1963. In addition to her parents, she was preceded in death by her brother, Cecil Snider. Mrs. McMahan worked 20 years in Dietary at Western Mental Health Institute in Bolivar and later was the owner/operator of The Sharecropper's General Store and Restaurant in Hornsby for 10-15 years. She attended Little Hatchie Baptist Church and was fond of mowing her lawn and fishing in her spare time. She was Co-founder and President of "The Gray-Haired Grannies", a group including her and several close friends in the area. She also was co-founder, along with her daughter, of "The Pink Azaleas" Relay-For-Life team helping raise money each year for the American Cancer Society. Mrs. McMahan is survived by her daughter, Jo McMahan, and fiance', Bobby Maness, of Bolivar; grandson, Ritchie Smith and his wife, Jessica of Hornsby; two great-grandchildren, Timber Lane and Oaklyn Everly Smith, also of Hornsby; two nephews and a niece, Randy, Shawn and Lindsey Snider, all of Powhatan, VA; and several great-nieces and nephews. Memorial contributions may be sent to the American Cancer Society. [http://www.cancer.org] While visiting or attending services for Mrs. McMahan, please consider the following guidelines: * Maintain 6 feet between yourself and the next closest person; * Refrain from hugs and handshakes; * When you sneeze or cough, use your elbow to cover your nose and mouth; * Wash your hands often; * Avoid touching your face; and * Minimize time spent in places where people gather.

Betty McMahan, 76, of Hornsby, passed away Monday morning, January 11, 2021 at her home. She was born in Dallas, TX on Tuesday, July 11, 1944 to the late Randolph and Cecilia Clopton Snider and had lived in Hardeman County since 1963. In addition... View Obituary & Service Information

The family of Betty McMahan created this Life Tributes page to make it easy to share your memories.

Send flowers to the McMahan family.