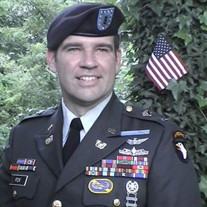 Brian (BK) Fox was born July 8, 1964, in Seaford, DE the son of Valvert Lucius Fox and the late Gayle Virginia Purse Sears. Brian lived in Delaware until he joined the Navy as an electrician's mate at age 18, where he learned to make ship repairs in his sleep. He became a Shellback when he crossed the equator on his way to Japan. Wanting to start a family, he left the Navy and tried his hand at civilian life as an electrician. He missed the military, so he joined the Army serving in the Old Guard and Infantry in Washington DC. He was Patrick Henry in the “Spirit of America” and did funeral honors until he transferred to Aviation and became a Blackhawk pilot. He met his wife, Karen, at church, a place he told everyone was the best place to find a good woman. They were married 31 years ago and have three children, of whom he is very proud. His attention to detail was passed along to his OCD family members. He fell doing an Australian repel demonstration just before his wedding, so he was always asking people when he felt pain “Do you feel that?” or when the constant whining noise in his ears changed, he would state, “Pitch change!” Anytime something didn’t do what he wanted it to do, he was heard to say, “You communist!” He threatened to “monkey flip” anyone who was misbehaving. He flew emergency relief missions in the Caribbean and to Central and South America. His military career took him to more than 30 countries, and he traveled to all 48 continental US states. He served as a Spanish interpreter while in Panama for visiting dignitaries. He invited a Spanish speaking foreign exchange student to live with his family. He also used his Spanish with the Peruvian Guard when he worked security at the Baghdad Embassy and later as their range master. He served as Flight Operations Officer in Bosnia and a Tactical Aviation Officer in Iraq. His physical ailments were excused by saying, “I was drove hard and put up wet.” He retired after 22 years as a Chief Warrant Officer. He found a new interest in wilderness survival just before his retirement while teaching at the SERE school, so he shared this knowledge with anyone who was interested. He told everyone to whom he tried to feed wilderness food that “it tastes just like chicken,” but in the same breath would say “BK don’t eat bugs.” Brian was a member of the Church of Jesus Christ of Latter-Day Saints where he faithfully served for 32 years as a missionary, teacher, Elder and clerk. He enjoyed serving in scouting and working with the youth. He had a sense of humor. He often threatened the young men who looked at his daughter that “he had a big knife.” Later he added “and my neighbor has a backhoe.” He loved to make people smile. He was a Cub and Boy Scout Leader for his sons. Fox Kits sponsored a BSA Venture Crew where he helped them plan and execute a 101-mile canoe trip. They also maintained the hiking trail signs at Big Hill Pond. He helped BSA with their Challenging Outdoor Personal Experience course consisting of group initiative games, trust events, and high and low ropes courses. He shared rappelling with his friends. He started a non-profit organization called “Patriots for Civic Action” to help his local community be better educated in political issues. He spent a year playing with GI Joe and his friends creating "Dammit Carl" memes. He enjoyed oil painting and helped teach anyone who was interested. He liked country music and classic rock. He did projects around the farm and had a longer list that needed to be done. He even purchased flood lights, so the family could extend farm projects into the twilight hours to finish before bedtime. He lent a listening ear and always shared sage advice. He got his private investigator license and inspected Alabama’s disability cases. After acquiring his Masters in Herbal Medicine, he made his own medical tinctures and shared them with friends and family. Shelby introduced him to local theater, so he immersed himself in his acting roles with costumes and props, his favorite part being a mentally challenged boy in “The Boys Next Door.” He did parts from “Crucible” to “Twelve Angry Men,” “Harvey,” “Wit,” “Miracle on 34th Street,” “The Wizard of Oz,” “A Facility for Living” and “Witness for the Prosecution” which was never performed due to COVID. Stage makeup led him to include first aid moulage at Fox Kits. He created and maintained his business website. He learned how to film and edit movies. He recorded his own dramatic performances of poems and readings. He was heard to say when asked how he was, “I’m finer than frog fuzz.” When people learned about all that he had done, he told them “I don’t know what I want to be when I grow up.” He was a wonderful son, spectacular soldier, devoted husband, loving father, missionary and true friend. He will be missed. Brian departed this life on September 27, 2021, in Jackson, Tennessee at the age of 57 Years, 2 Months, 19 Days. He is survived by his wife Karen (Woodbury) Fox of Selmer, TN; two sons, Kevin Fox and wife Kathryn and Joseph Fox; a daughter, Shelby (Fox) Brown and husband Jacob; his father, Valvert Fox; two sisters, Angela Fox and Valerie Foxmoore; and many extended family and friends. In addition to his mother, Brian was preceded in death by his stepmother, Dorlene Ann Fox.

Brian (BK) Fox was born July 8, 1964, in Seaford, DE the son of Valvert Lucius Fox and the late Gayle Virginia Purse Sears. Brian lived in Delaware until he joined the Navy as an electrician's mate at age 18, where he learned to make ship repairs... View Obituary & Service Information

The family of Brian (BK) Fox of Selmer, TN created this Life Tributes page to make it easy to share your memories.

Send flowers to the Fox family.