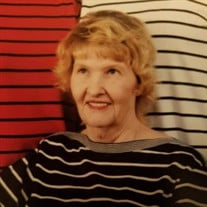 Catherine Warren was born December 6, 1938 in McNairy, TN the daughter of the late Arnold Nathaniel and Rosie Lee Patterson Henry. She was united in marriage to James Stanley Warren on June 19, 1955. Mr. Warren preceded her in death on May... View Obituary & Service Information

The family of Catherine Warren of Bethel Springs, Tennessee created this Life Tributes page to make it easy to share your memories.

Send flowers to the Warren family.