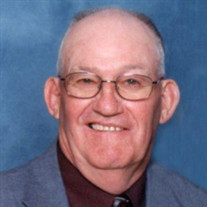 Charles "Avis' Durham passed away on August 24, 2020 at the age of 82 years, 11 months, and 21 days. He was born on September 14, 1937, in the Jot-Em-Down community of McNairy County, Tennessee, to Johnny W. and Eva M. Hughes Durham. Avis was united in marriage to Linda Cody on June 11, 1988. He has been a member of the First Baptist Church in Adamsville for many years. Avis was a man who wore many hats during his lifetime. He was a veteran who served in the Army. He worked with his father and his son farming the family land. Avis also did factory work, was an aircraft assembler, carpenter, bridge builder, and concrete finisher. He made many friends and met many people. He loved to fish, gardening, and spending time with his family. Avis was an avid sports fan, but his passion was baseball and the St. Louis Cardinals. Avis is survived by his wife, Linda Durham of Adamsville, Tennessee; sons, Terry Durham and Kevin Wren, both of Adamsville, Tennessee; daughters, Anittia Carnell (Otis) of Henderson, Tennessee, Melissa Higdon (Dennis) of Huntsville, Alabama, and Teresa Holifield (Lee) of Piggott, Arkansas; grandchildren, Teri Dale, Michael Gilbert (Brandi), Joshua Gilbert, Sheri Durham Carroll, Nicole Beirne (Kevin), and Blake Carnell; great grandchildren, Beau Carroll, Ivey Carroll, Bryson Gilbert, Macee Gilbert, Gunner Gilbert, Blaine Beirne, Asher Beirne, and Roland Carnell; one sister, Janice Ganus. He was preceded in death by his parents, Johnny and Eva Durham; brothers, Calvin Durham and JW Durham; sisters, Dorothy Durham, Marie Mulder, Bessie Smith, and Jenny Jones; and daughter-in-law, Joyce Durham. The family requests for those attending the visitation and service to please wear a mask.

The family of Charles Avis Durham created this Life Tributes page to make it easy to share your memories.

Send flowers to the Durham family.