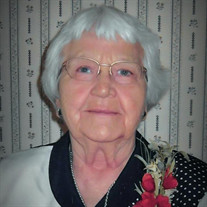 Clara Ann Hampton Kelley, 89, of Bolivar, passed away Friday morning, September 18, 2020 at AHC Healthcare in McNairy County. She was born November 11, 1930 in Middleton, daughter of the late Willie Frank Norton and Ida Bishop Norton and grew up in the Middleton area. She married David Hampton on December 13, 1953 and they moved to Bolivar. He passed away on February 28, 1994. She later married George M. Kelley on June 15, 1995 and he passed away in November of 2004. She was a homemaker and would sit with and take care of the elderly. She was an active member of the Bolivar Senior Citizens Center, enjoying bingo and participating in all their activities. She was also known for her quilting and was a member of the VFW Auxiliary. A former resident of Pine Meadows Healthcare Center, she often would be found at all of their programs. Mrs. Kelley was a member of Bolivar First Baptist Church where she was involved in the Sunday School and was a former member of the Golden Sounds Choir. Survivors include three daughters, Diane Holmes (David) of Bolivar, Elaine Wharton of Jackson and Pamela Bishop (David) of Olive Branch, MS; a twin brother, Dan Norton (Virginia) of Germantown; 5 grandchildren, Nancy Holmes Henson (Paul) of Guys, TN, Kerry Holmes (Emily Baldwin Holmes) of Gulfport, MS, Crystal Wharton Heinz of Staunton, VA, Paul and Aaron Bishop, both of Olive Branch, MS; four great grandchildren, Emily Holmes and Alexandria Watkins, both of Gulfport, MS, Hunter and Hudson Heinz, both of Staunton, VA; and three step great grandchildren, Drayden, Abigayle and Adam Baldwin of Gulfport, MS. In addition to her husbands and parents, she was preceded in death by 4 brothers, Bill, Jim, George and Julius Norton and a sister, Edna Earl Norton. Memorial contributions in her name may be sent to the American Heart Association (www.heart.org/donate) or the Tyler Bomar Scholarship Fund at CB&S Bank in Bolivar.

The family of Clara Ann Hampton Kelley created this Life Tributes page to make it easy to share your memories.

Send flowers to the Kelley family.