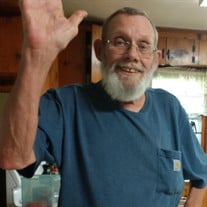 Donald Kirk Frazier departed this life on Monday, November 29, 2021, at the age of 64 years, 7 months, and 12 days. He was born in Phoenix, Arizona the son of Shirl Frazier and the late Shirley Rose Lewis Frazier. In March of 1983, he was united... View Obituary & Service Information

The family of Donald Kirk Frazier created this Life Tributes page to make it easy to share your memories.

Send flowers to the Frazier family.