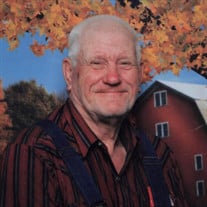 Gene Wright was born December 31, 1938 in Tipton County, TN the son of the late Richard Fenton and Ella (Susie) Sue Newman Wright. He was united in marriage to Lucille Goodman on July 14, 1960. Mrs. Wright preceded him in death on May 18, 2001. Mr.... View Obituary & Service Information

The family of Gene Wright of Bethel Springs, Tennessee created this Life Tributes page to make it easy to share your memories.