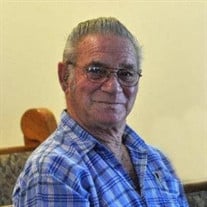 James Irby Evans, son of the late Joseph Elliot Evans and Mary Bevill Baxter, was born March 30, 1938, in Middleton, Tennessee. For many years, James designed and constructed swimming pools as owner of Evans Excavation in Bakersfield, CA. Upon returning to Tennessee in 1985, James went to work as a mechanic at Hardeman County Highway Department, where he remained until his retirement. Throughout his life, he enjoyed spending time working on cars and making handcrafted furniture in the shop at his home in Middleton, TN. People describe James as one of the most hardworking people they've ever known. He could accomplish anything he set his mind to do. Those who knew James, loved and respected him. James departed this life on March 29, 2021, in Bolivar, Tennessee, at the age of 82 Years, 11 Months, 29 Days. He is survived by his wife of 24 years, Lidia Haygood Evans of Middleton, TN. In addition, he is survived by five daughters: Gail Plater of CA, Cheryl Hall of CA, Beth Evans Sisco of Selmer, TN, Machelle (Curtis) Brush of Somerville, TN, Sarena Evans of Selmer, TN; a son, James H. Evans of CA; four stepchildren: Gail Whitehead, Vicki McClaughlin, Brenda Stewart, and Marlin Stewart; a brother, Larry Baxter of Corinth, MS; nine grandchildren: Eric Adams, Maranda Hernandez, James Joseph Evans, Dana Evans, Jesse Sisco, Cassie Sisco, Kelly Brush, Madison Howell, and Gabriel Locke; and many great grandchildren. In addition to his parents, James was preceded in death by a brother, Thaddeus "Buddy" Evans; and former wives Betty McCoy and Susan Weese. A memorial service to honor Mr. Evans will be on April 10th at 3:00pm at the Middleton Community Center.

The family of James Irby Evans of Middleton, TN created this Life Tributes page to make it easy to share your memories.