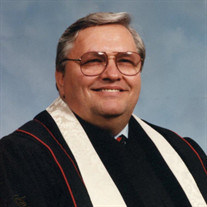 James Richard (Dick) Haley was born on July 22, 1944 in Wardell, Missouri. His mother was the late Laura L. Haley. After graduating from Hayti High School in May, 1962, Dick moved to Memphis, Tennessee where he met his future wife, Loretta A. Stone. Dick and Loretta were married on August 2, 1963. He enlisted in the Air Force in January, 1963 and after basic training in Texas, was stationed in Myrtle Beach, South Carolina. He did tours of duty in India, Turkey, Italy, Spain, and other countries in Europe. While in the Air Force, their first daughter, Gina Ann (Scott) Roberts was born. When his enlistment was up, the Haley's returned to Memphis and Dick was employed by National Linen Service and Tastyee Bread Co. Their second daughter, Amy Beth (Ricky) Gamblin was born. In January, 1970, Dick answered the call to Ministry and was appointed to Mercer-Andrews Chapel Charge in June of that year. Their third daughter, Christy Lynn (Thomas) Potts was born in October of that year. During this time, Dick also finished college and seminary. He received a Bachelor of Science from Lambuth College and Master of Divinity from Memphis Theological Seminary. They served churches over West Tennessee and West Kentucky for the next 44 years. In June, 2009, he retired from the Pickwick-Pisgah Charge, but continued to serve the Pisgah Church until 2014. The Haley's fell in love with this area and retired to Shiloh, Tennessee. Dick was wheel chair bound for several years. In September of 2020, he became ill and was in the hospital for 15 days after which he had to go to the nursing home. This was a very trying time for Dick and his family, especially since Covid prevented his family from visiting him. On Good Friday, Dick went, peacefully, with his family at his bedside, to be with his Lord. Beside his wife and daughters, Dick leaves three grandchildren, Andrew Potts, James (Will) Potts, and Haley Gamblin and three step grandchildren, Logan (Allie) Roberts, Ellie (Eddie) Grau, and Emmie Roberts, one step great grandchild, P J Roberts. Dick based his whole ministry on Love. His favorite Bible passage was the Love Chapter (I Corinthians 13) and his favorite Bible quote was from John Wesley, the founder of the Methodist Church: "Best of all, God is with us." In lieu of flowers, the family would like to request memorial donations be made to: Pisgah Cemetery Association c/o Linda Austin 585 Gladden Road Counce, Tennessee 38326 -or- St. Jude Children's Hospital www.stjude.org

James Richard (Dick) Haley was born on July 22, 1944 in Wardell, Missouri. His mother was the late Laura L. Haley. After graduating from Hayti High School in May, 1962, Dick moved to Memphis, Tennessee where he met his future wife, Loretta A.... View Obituary & Service Information

The family of James Richard (Dick) Haley created this Life Tributes page to make it easy to share your memories.

Send flowers to the Haley family.