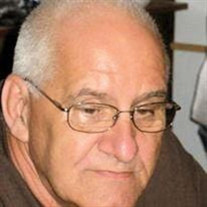 JAMES ‘JIM’ JOHNSON Henderson, TN: James Allan Johnson age 67 passed away December 27, 2020 at his home. He was born July 25, 1953 in Rockford, IL and grew up in Rockford, the son of the late Bill and Willie Huffman Johnson. He graduated from Auburn High School in Rockford. He married Kathleen ‘Kathy’ Kay Vargason in 1980. They made their home in Rockford most of their married life, lived in Iowa for six years, and moved to Henderson a year and half ago. He worked in Manufacturing in Rockford most of his career. He enjoyed fishing, ice fishing up north in the winter and also fishing after they moved to Henderson with his brother. He was a NASCAR fan and enjoyed golfing. He loved his 1966 Barracuda and visiting car shows. Jim was a loving father, husband, friend, and he loved his nieces and nephews. His mission was to put a smile on the face of those he met. He had a special way and time frame of saying good-bye. Mr. Johnson is survived by his wife, Kathleen ‘Kathy’ Kay Vargason Johnson of Henderson; three daughters, Renee Hackmann (Brent) of Monona, Iowa, Erica Scott (David) of Rockford, IL and Roberta Perkins of Rockford, IL; five grandchildren and one great grandchild; four brothers, Carl Wilson of Rockford, IL, Robert Wilson of Muscle Shoals, AL, Gary Wilson of Reagan, TN and Nicky Wilson of Rockford, IL and two sisters, Cathy Porter of Rockford, IL and Donna Brunowski of Rockford, IL. A memorial services will be held later in Northern, IL in the spring or summer of 2021. Shackelford Funeral Directors of Henderson 731-989-2421

The family of James 'Jim' Johnson created this Life Tributes page to make it easy to share your memories.