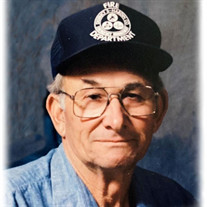 James “Gordon” Johnson was born in Hardin County, Tennessee on November 25, 1934, to the late Edgar Augustus and Bannie Greer Johnson. He was the youngest of four children. Gordon was united in marriage to Bettye Sue Barnes on October 24, 1953. They were a devoted couple, who only spent time away from each other while Gordon was stationed with the 317th Combat Engineers Battalion in the United States Army. Gordon worked as an automotive millwright at PCA in Counce for over 30 years, during which time he was a member of the local chapter, #9-978, of the United Steelworkers Union. Gordon took pride in his hometown of Counce, Tennessee, where he was often a community leader. He served as District 3 Hardin County Commissioner from 1978 until 1994, was past president of the Shiloh-Pickwick Lion’s Club, was past President of the Pickwick Athletic Association, was past chairman of the Hardin County Emergency 911 Board, and Chairperson of the cemetery at Pisgah United Methodist Church, where he was a lifelong member. He was particularly proud of his involvement with the District 3 Fire Department from 1980 until 2005, on which he served as a Captain and a first responder. Gordon was an excellent mechanic and could most often be found tinkering in his shop, with Bettye at his side. He was always available to help his children, grandchildren, nieces, nephews, or anyone in need. Gordon was a man of few words, but his accomplishments speak volumes. He will be dearly missed, but his loved ones find comfort in knowing that he is reunited with his loving wife. He departed this life on Monday, August 23, 2021, at the age of 86 years, 8 months, and 29 days. Gordon is survived by his son, Phil Johnson and his wife Jenifer; his daughter, Sally Jenkins; his grandchildren, Cassie Tidwell and her husband Josh, Jacob Johnson and his wife Alyce, Evan Johnson, Will Browder, and Ashley Browder; and his great grandsons, Laiden Johnson, Job Johnson, and Greer Tidwell. In addition to his parents, he was preceded in death by two brothers, Wesley and Leslie Johnson, and one sister, Lorraine Johnson. In lieu of flowers, please consider donating to the Hardin County District 3 Fire Department or Pisgah United Methodist Church of Counce, TN.

James &#8220;Gordon&#8221; Johnson was born in Hardin County, Tennessee on November 25, 1934, to the late Edgar Augustus and Bannie Greer Johnson. He was the youngest of four children. Gordon was united in marriage to Bettye Sue Barnes on... View Obituary & Service Information

The family of James Gordon Johnson created this Life Tributes page to make it easy to share your memories.

James “Gordon” Johnson was born in Hardin County, Tennessee on...