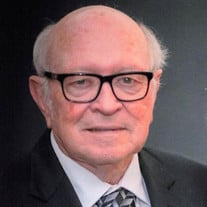 James Carter (Jim) Whittington was born on March 13, 1945 in Memphis, TN. His parents were the late Paul Brady and Margaret Carter Whittington. He spent his early childhood in Marked Tree, AR before the family moved to Selmer, TN. Jim was a 1963 graduate of Selmer High School and received a Bachelor's Degree in Political Science from Rhodes College in Memphis, TN. After graduating from college, he served his country in the United States Air Force as a medical technician for four years. On May 24, 1969 he married Annette Grissom Whittington and they have cherished 52 years together. After his discharge from the service in 1971, Jim and his family returned home to Selmer. Jim worked for his father at City Lumber Company as the manager for 25 years. Jim was a wonderful husband, father, and grandfather. He coached Little League baseball and football and was an avid MCHS Bobcats football fan. For many years he would be on the sidelines on Friday nights carrying the chains. Jim was involved in his church and community all his adult life. He was an active member of the First United Methodist Church of Selmer, where he served on the administrative board and various other committees. He served as the Disaster Relief Response Coordinator for UMCOR following hurricane Katrina. He and his wife Annette were members of the West Tennessee Emmaus Community and served on many leadership teams. Jim held a position on the McNairy County Commission and Selmer Board of Aldermen before being elected Mayor of Selmer in 1991, a position he held for 14 years. During his years as Mayor, he became a West Star Graduate and a member of the Delta Leadership 21st Century Organization as well as the Tennessee Municipal League. Jim could be described best as a servant leader. He surrounded himself with people who had the expertise to write grants, to influence others, and to get things done. Following his tenure as Mayor, Jim was able to use his gifts of administration as cofounder of Jesus Cares. He also found time to enjoy his passion as a tour guide at Shiloh National Military Park. Jim was a University of Tennessee football Fan and he found great pleasure in watching the games every Saturday. He and Annette spent much time each summer playing golf and traveling. They travelled throughout the United States, Canada, and Europe. Jim departed this life on November 5, 2021 at his home in Selmer at the age of 76 years, 7 months, and 23 days. Besides his parents, Jim was preceded in death by two sons, James Bradley and Robert Kevin Whittington. He is survived by his wife Annette of Selmer, TN; his grandsons, who affectionately referred to him as "Jim-Pop," Mason Aubrey Whittington and Brady Chadwick Whittington, both of Medina, TN and grandsons mother, Kellie Garrett (Wade) ; brothers-in-law and sisters-in-law Ray and Janice Newbill of Martin, TN and Bill and Joan Grissom of Selmer, TN; nephews Raymond Newbill (Angie) of Naples, FL, Robb Newbill (Amy) of Martin, TN, Russell Newbill of Braden, TN, and Chris Grissom (Kim) of Bethel Springs, TN; and a niece, Joy Grissom of Knoxville, TN. The family requests that memorials be sent to Jesus Cares, UTM Selmer Center Whittington Family Scholarship Fund, or First United Methodist Church of Selmer.

James Carter (Jim) Whittington was born on March 13, 1945 in Memphis, TN. His parents were the late Paul Brady and Margaret Carter Whittington. He spent his early childhood in Marked Tree, AR before the family moved to Selmer, TN. Jim was... View Obituary & Service Information

The family of James Carter (Jim) Whittington of Selmer, TN created this Life Tributes page to make it easy to share your memories.

Send flowers to the Whittington family.