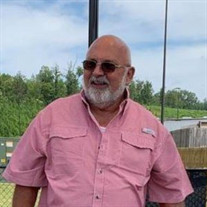 Henderson, TN: John Everett Ayers nicknamed “Animal” age 67 passed away December 29, 2020 at Jackson Madison County General Hospital. He was born January 3, 1953 in East Port, Maine, the son of the late Everett and Gertrude Pulk Ayers. He grew up in Pembroke, Maine and lived in Connecticut, New York and Florida. He was married to Patricia Partridge for 20 years and they had three daughters together. She survives and lives in North Port, Fl. He later married Sheila Knapp on February 4, 1996 and they share a son Justin. They moved to Henderson, TN in 2007 and he was a truck driver for Shaw Concrete, a job he loved. He was a Christian family man and loved everything he had. He had a good sense of humor, joking and telling stories and pranking his kids and grandkids doing things like sticking his dirty socks in their face and asking how many more times he could wear them. While living in Maine, he was a big clammer. He was extremely generous and was known for his work ethic. He enjoyed growing roses and sharing the cuttings from his roses and he also enjoyed his Frangipani tree. He was faithful to watch the Weather Channel and loved his Little Debbie snack cakes. He didn’t ask for much: guns, boats, a Harley, dually fifth wheel camper, and lastly a bulldozer! Mr. Ayers is survived by his wife, Sheila Knapp Ayers of Henderson; a son, Justin Michael Ayers and (Fiancee Fallon Faulkner) of Henderson; three daughters, Kristen Pratt (Randy) of Green Forest, AR, Karen Ayers of North Port, FL and Jessica Ayers of Port Charlotte, FL; fourteen grandchildren Carrie (Wayne) Lindquist, Nathan (Kimberlynne) Pratt, Brandon (Taylor) Pratt, Brittany, Joy, Jamin, Kurt, Gabriel and Elijah Pratt, Anthony and Hailey DeSola, Alexia Rodriguez, Sabrina Ayers, Jacob Guthrie and seven great grandchildren Gideon and Micah Lindquist, Brighton and Liberty Pratt, Ella and Hazel Pratt, Lilianna Dunlap; two sisters, Rena Packer of Lyndonville, Vermont and Patricia Jollotta of Bethel, Alaska. He was preceded in death by his parents, a brother, Michael Ayers and two sisters, Mary Dudley and Shirley McPhail. There will be a Celebration of Life Service held January 2, 2021 at 12:00 pm at the Chester County Rescue Squad, 320 Quinco Drive, Henderson, TN 38340.

The family of John Ayers - Henderson created this Life Tributes page to make it easy to share your memories.

Send flowers to the Ayers family.