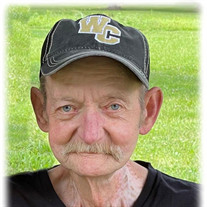 Mr. Johnny Chester Andrews was born October 31, 1954 in Waynesboro, TN the son of the late Chester and Maudie Lee Story Andrews.He was united in marriage to the former Neva Ray Perry on July 14, 1972. Mr. Andrews had several jobs through the years, starting out with Genesco and then working for GE until that part of the plant was closed, then he worked for the Bradley's running the local Purity milk route and then served as Campground Manager for Buffalo River Trailride. He loved to spend time outside, especially when he could be fishing with his boys,Kevin and John or the grandkids. He was a member of the Zion Baptist Church Mr. Andrews departed this life on April 27, 2022 in Waynesboro, Tennessee at the age of 67 Years, 5 Months and 27 Days. He is survived by his wife of 49 years, Neva Ray Perry Andrews of Waynesboro, TN; two sons, John Thomas Andrews and wife Daisha of Waynesboro, TN, Kevin Wayne Andrews of Collinwood, TN; a daughter, Sheryl Lynn Andrews Skelton and husband Mitchell of Waynesboro, TN; four brothers, Dairl Andrews, Grayford Andrews, LeeRoy Andrews and Bobby Andrews all of Waynesboro, TN a sister, Zuella Andrews Dixon of Waynesboro, TN; six grandchildren, Reagan Skelton, Tyler Andrews, John Austin Skelton, Chloe Skelton, Tucker Andrews, Kailyn Andrews; a great grandchild Macklynn Andrews. He is also survived by his mother-in-law, Katie Perry of Waynesboro, TN In addition to his parents, Mr. Andrews was preceded in death by twin-infant brothers and his father-in-law, Jasper Perry Visitation will be held on Friday April 29, 2022 from 9:30 AM until service time at 1:00 PM all at Shackelford Funeral Directors in Waynesboro. Services will be held on Friday April 29, 2022 at 1:00 PM at Shackelford Funeral Directors, Waynesboro, with Mitchell Skelton and Jacob Kitchens officiating. Burial will follow in the Gallaher Cemetery at Waynesboro, Tennessee Those honored to serve as pallbearer include: Dairl Andrews, Tyler Andrews, John Austin Skelton, Tucker Andrews, Overton "Rabbit" Smithson and Ramon Ramirez. Those honored to serve as honorary pallbearer include: Grayford Andrews, LeeRoy Andrews, Bobby Andrews and Colton Holder

Mr. Johnny Chester Andrews was born October 31, 1954 in Waynesboro, TN the son of the late Chester and Maudie Lee Story Andrews.He was united in marriage to the former Neva Ray Perry on July 14, 1972. Mr. Andrews had several jobs through the... View Obituary & Service Information

The family of Johnny Chester Andrews created this Life Tributes page to make it easy to share your memories.

Send flowers to the Andrews family.