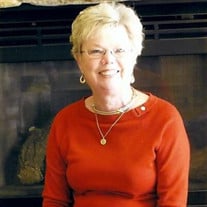 Linda Garner Rouse Hines, age 80, of Mountain Home, Arkansas entered her heavenly home on April 20, 2022. Linda Mae Garner was born on February 23, 1942, in Masseyville, TN, the second child of Haven David Garner and Willie Albert Clayton Garner. After graduating from Bethel Springs High School in 1960, she married her sweetheart, Bill Rouse, and made a life with their four children, Sherry, Jackie, Cindy, and Barry in Memphis. Bill preceded Linda in death in 1974. Linda later married Richard “Bennie” Hines, and became a beloved stepmother to Robert, Rhonda, Ricky, and Robin. Linda was an adored beautician for 49 years, making ladies look their best and at the same time, providing much comic relief for them while they were in the chair. Her clients always showered her with gifts, and stayed in touch with her throughout their life, even after Linda’s retirement. Any friend that she made became a lifelong friend. She was a pleasure to be around and the kind of friend everyone wants to have and keep. Linda loved a bargain and frequented as many yard sales as possible on Saturdays. Her home was a treasure trove of oddities, Elvis memorabilia, and hundreds of cookbooks. She spent 25 years traveling the world with her love, Joe Venezia, who passed away in 2019. Together they visited almost every National Park in the United States and several foreign countries. The epitome of a southern belle, Linda was graceful, compassionate, friendly, loyal, faithful, gentle, courageous, gracious, honest, compassionate, responsible, and most of all, joyful. Friend, family, or stranger, Linda had a smile and a funny tale for anyone who would listen. She was the best verbal storyteller, an art lost to text and email. In addition to her husband Bill, Linda was predeceased by her parents, Haven and Willie Albert Garner, a daughter Sherry Yvonne Rouse, two sons Jackie Allen Rouse and Barry Nelson Rouse, a brother, Ralph Douglas Garner, and a sister-in-law, Phyllis Garner. She is survived by a daughter, Cindy Gaye Reese (Paul), grandchildren Jon Paul Reese and Victoria Christina Reese, all of Jordan, AR, a daughter Robin Jones (Jason) and their sons Cameron and Cooper, of Jacksonville, FL, step-children Robert Hines (Lisa), Ricky Hines (Melanie), and Rhonda Shewell (Myron), a sister Lettie Garner Hines (Douglas) of Selmer, brothers Michael Garner (Judy) of Paris, Phillip Garner of Finger, and Dwight Garner (Barbara) of Finger. She leaves behind a host of nieces and nephews, all of whom shared a special relationship with her. Linda came from a long line of strong women, and her resilience was to be admired. She remained steadfast in her faith in Jesus Christ throughout her life, in the face of much loss and hardship. The life that she lived has impacted all who knew her in a positive way. Her legacy will live on in the stories that she told, the smiles that she shared, and the joy that she exhibited every day. Visitation is Monday, April 25 from 10am-1pm at Shackelford Funeral Home in Selmer, with services immediately following in the chapel, officiated by Jetta Forsythe and Nelson Siler. Pallbearers are Scott Hines, Jason Jones, Clay Garner, Terry Hurst, Tony Trotter, and Rob Hewitt. Honorary pallbearers are Johnny Warren Garner, Guy Garner, and Gary Joe Wilson. Interment will be at Old Friendship Baptist Church, Finger, TN.

The family of Linda Garner Rouse Hines of Mountain Home, Arkansas created this Life Tributes page to make it easy to share your memories.

Send flowers to the Hines family.