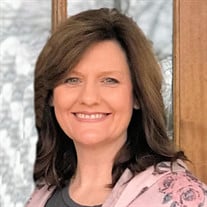 Lori Hawkins was born February 20, 1966, in Selmer, TN the daughter of Elizabeth McClain Thomas and the late Henry Clay Thomas. She was united in marriage to Daryl Hawkins on August 31, 1984. Lori graduated from McNairy Central High School and Jackson State Community College, earning an Associate of Applied Science degree as a Physical Therapist Assistant. She was employed as a PTA for Fox Army Health Center in Huntsville, AL where she and her husband Daryl had lived for the past five years. Prior to their move to Huntsville, Lori and Daryl made their home in Selmer, TN where she worked for West Tennessee Health Care and McNairy Regional Hospital. She took immense pride in helping her patients regain their ability to function and live a quality life. Spending time with her family and friends, taking care of her grandbabies, playing in the floor with John Thomas, baking, reading an enjoyable book, and traveling with her husband Daryl were some of Lori's favorite activities. She was a faithful member of Lakeview Baptist Church. Lori departed this life on September 16, 2021, in Huntsville, Alabama at the age of 55 Years, 6 Months, 27 Days. She is survived by her husband of 37 years, Daryl Hawkins of Madison, AL; two sons, John Thomas (J. T.) Hawkins and wife Randa of Selmer, TN and Samuel Hawkins of Birmingham, AL; two grandchildren, John Thomas Hawkins II and Hayes Henry Hawkins, both of Selmer, TN; her mother, Elizabeth Thomas of Guys, TN; a brother, Lynn Thomas and wife Julia of Guys, TN; three sisters: Carla Pierce and husband Bryan of Meridian, MS, Amy Phillips and husband Keith of Daphne, AL, and Beth Wallace and husband Chad of Selmer, TN; her in-laws, Donald and Doris Hawkins of Selmer, TN; a brother-in-law, Darren Hawkins and wife Tisa of Selmer, TN; and many extended family and friends. In addition to her father, Lori was preceded in death by a son, Zachary Clay Hawkins, and a Hawkins grandbaby. In lieu of flowers, the family requests donations to Heaven's Cradle at http://www.heavenscradle.org/ A private family service will be held at Shackelford Funeral Directors in Selmer, Tennessee, with Darren Hawkins, Colonel Jim Botters, Army, Retired and Jacob Phillips officiating. Burial will follow in the Oak Hill Cemetery at Selmer, Tennessee. The service will be livestreamed for those who would like to attend virtually. Please log in at 1:00 PM on Saturday, October 2nd. http://www.shackelfordfuneraldirectors.com/obituaries/permalink/10134196/LTWebcast

The family of Lori Hawkins of Huntsville, AL (formerly of Selmer) created this Life Tributes page to make it easy to share your memories.