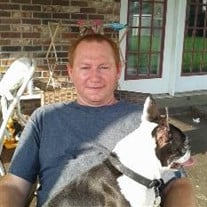 Michael Gene Doty of Selmer, TN, formerly of Fairfield, IL was born August 2, 1966 in Fairfield, IL the son of Cleve Doty and Rita Sork Doty. He was united in marriage to Lori Beth Milford on April 24, 1993. He worked for Airtex Produst in... View Obituary & Service Information

The family of Michael Gene Doty of Selmer, TN created this Life Tributes page to make it easy to share your memories.

Send flowers to the Doty family.