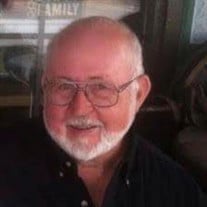 WALTER COOPER Henderson, TN: Robert Walter Cooper age 77 passed away August 4, 2021 at Jackson Madison County General Hospital. He was born February 20, 1944 in Chester County, the son of the late M. C. and Tressie Lee Hearn Cooper. He attended Chester County High School. He farmed and raised hogs while also working for Harmon International in Bolivar for over thirty years until it closed. He then worked at Kilgore in Toone, retiring in 2011. He married Brenda Stack on June 28, 1997 and they made their home in Montezuma. He was a member of the Montezuma Methodist Church. He loved hunting, fishing and gardening. He also raised a huge garden and sold most of his produce. He loved talking to people and large church gatherings. He loved his family most of all. He was a good neighbor and would always help when needed. Mr. Cooper is survived by a son, Chris Kaven Cooper and wife Derrith of Henderson; a stepson, Thomas “Tommy”Lynn Naylor and wife Dujuana of Hornsby; a stepdaughter, Karen Woods; four grandchildren, Peyton Cooper, Thomas Cody Naylor, Sarah Brooke Naylor and Hailey Raymond; five great grandchildren, Ramsay Naylor, Aurea Raymond, Shayne Raymond, Cooper King, Kenna King and another one on the way; step grandchildren, Breanna Jones, Paige Jones and Tucker Woods and two brothers, Jimmy Cooper and wife Pamela of Henderson and Bill Cooper and wife Shirley of St. Charles, IL. He was preceded in death by his parents, and his wife, Brenda Stack Cooper on April 20, 2021. Funeral services will be 11:00 AM Saturday August 7th at Shackelford Funeral Directors – Crook Avenue with Charlie Crouthers officiating. Burial will follow in Montezuma Cemetery. The family will receive friends at Crook Avenue 5:00 PM until 8:00 PM on Friday. Shackelford Funeral Directors of Henderson 731-989-2421

The family of Robert Walter Cooper of Henderson created this Life Tributes page to make it easy to share your memories.

Send flowers to the Cooper family.