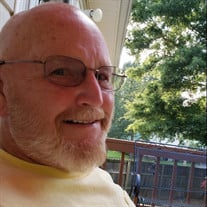 Robert Lewis Shackelford was born July 4, 1944 in Memphis, Tennessee, the son of the late Arnold Woodrow and Chrystine Elizabeth Singleton Shackelford. He served his country as a member of the Air National Guard during the Vietnam era before settling down with Mary Alice Ballow whom he married on Valentine’s Day in 1997. Bob, as everyone knew him, migrated to Ohio for a few short years when he was younger, but quickly returned to his birthplace, taking his first job with Memphis Light Gas and Water. His training as an electrician helped him land jobs with the Schlitz Brewing Company, John Morrell, and Firestone before finally working for FedEx, performing line maintenance for the company. After his retirement, he and Alice escaped the big city, moving to Savannah, Tennessee in 2005. Fishing was one of Bob’s favorite pastimes; he was such an avid fisherman that he participated in and won numerous tournaments and was eventually elected the President of the FedEx Bass Association. He also enjoyed cooking out, grilling just about anything—but his greatest joys came from attending church at Riverview Baptist where he was a member, and being with his family. Bob passed away unexpectedly on Monday, September 6, 2021 at the age of 77 years, 2 months, and 2 days. He leaves behind his beloved wife of 24 years, Alice Shackelford of Savannah, Tennessee; four children, Christy Rich and her husband Craig of Atoka, Tennessee, Angie Cash, also of Atoka, Michael Fletcher and his wife Angela of Southaven, Mississippi, and Jennifer Craig and her husband A.J. of Collierville, Tennessee; his sister Terri Becher and her husband John of Orlando, Florida; nine grandchildren, Cari Beth Walden, Mark Burnett, Nicole Burnett, Janie Burchard, Brett Cash, Victoria Moore, Braeden Anthony, Wyatt Rich, and Katelyn Craig; and seven great-grandchildren, Thomas Burnett, Emmaline Burnett, Jameson Burnett, Bristol Burchard, Blaze Burchard, Hudson Walden, and Brodie Moore. Other than his parents, Bob was preceded in death by his brother Gary Shackelford. To honor Bob’s memory, his family has requested that donations be made to either the American Diabetes Association or the American Heart Association.

Robert Lewis Shackelford was born July 4, 1944 in Memphis, Tennessee, the son of the late Arnold Woodrow and Chrystine Elizabeth Singleton Shackelford. He served his country as a member of the Air National Guard during the Vietnam era before... View Obituary & Service Information

The family of Robert (Bob) Shackelford created this Life Tributes page to make it easy to share your memories.

Send flowers to the Shackelford family.