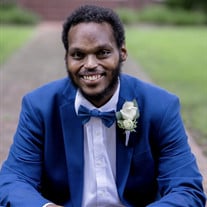 Ronald Graham Casey was born in Selmer, Tennessee on October 8, 1995 the son of Ronnie and Mary Elaine Winters Casey. Ronald graduated Hardin County High School, where he played for the Hardin County Tiger Football Team for four years. He always loved playing sports, played baseball and even went to the Little League World Series. After High School he attended MTSU for a year and then later went to work for Jones Motor Company in Savannah. Ronald loved spending his time riding four wheelers, playing video games with his friends, watching and going to UT football games, and playing with his dog Marley. He could always brighten anyone's day, no matter the situation and was always joking and making everyone laugh. Ronald always put other's well being and happiness above his own. He was a member of St. John Missionary Baptist Church. Above all, Ronald loved the Lord, his family, his friends, and the love of his life Taylor. He departed this life on Sunday, September 26, 2021 in Savannah, Tennessee at the age of 25 years, 11 months and 18 days. Ronald is survived by his parents, Ronnie and Mary Elaine Casey of Savannah, Tennessee; sister, April Thomas of Savannah, Tennessee; brothers, Shon Irons of Savannah, Tennessee, and Ronnie Lee Casey of Denver, Colorado; nieces, Kamara Casey and Remi Woodmore; and nephews, Malik Casey and Jett Woodmore. Ronald also leaves behind, Taylor Alexander, his fiancé, the love of his life. They have been together for 9 years and were to be married on October 2, 2021. He was preceded in death by his grandparents, Chaney Graham Winters, William Sherman Winters, Betty Jo Casey, and Henry Sank Casey. Ronald was the strongest man, he fought his battle with leukemia on and off for a long 8 years. Never giving up through the hardest of times, till the very end. Memorial donations may be made to Darryl Worley Cancer Treatment Center, 935 Wayne Road, Savannah, TN 38372

The family of Ronald Graham Casey created this Life Tributes page to make it easy to share your memories.

was born in Selmer, Tennessee on October...

Send flowers to the Casey family.