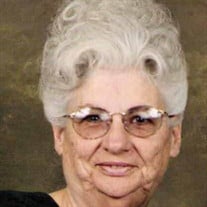 During the early hours of Monday, March 1, 2021 Shirley Jean Johnson joined the love of her life. Bobby Dee Johnson, in Heaven. Shirley was born in McNairy County, and was the 2nd child of James Thomas and Gladys Euwell Moore Barnes. Bobby and Shirley met at a church service and were married two weeks later on November 8, 1952 in Alcorn County, Mississippi. The couple moved to Memphis & resided with Bobby’s parents until they were able to afford their own place. In the fall of 1959 Bobby and Shirley bought their home at 2554 Henderson in Memphis; where they raised their 3 children Sherry Lynn, Theresa Gayle, and Bobby Jr. They resided here until they moved to North Road in Enville (Milledgeville) in July 1994. Shirley worked for Baptist Memorial Hospital on Madison Avenue in Memphis-twice. While living in Memphis, the Bobby Johnson family attended Church of The Lord Jesus Christ on Grey Road. For 20 years, Shirley taught the 4- and 5-year-old Sunday School class. Upon moving back to Chester County, Bobby and Shirley visited several Pentecostal churches in the area before choosing Christian Assembly Pentecostal Church in Adamsville. Bobby and Shirley became active in the church until Shirley became unable to walk and Bobby devoted the rest of his time caring for her. Shirley loved to cook. Before Shirley’s health declined, she and Bobby were always baking cakes for church and for family and friends. At any time, there were at least 2 cakes in the freezer. Anyone who knew Shirley knew that she was a coupon clipper. She clipped her coupons and used them religiously; she was very upset when coupons went digital. She was a bargain hunter. She always had several “back up” gifts that she could pull out to give. She and her sister Peggy would go to Jackson & stock up on these presents. This is something that she passed to two of her granddaughters, Amanda and Angela. Shirley loved her family very much, especially her grandchildren and great grandchildren. To her, Bobby’s family was her family, not her in-laws. His parents, brothers, sisters, nieces, and nephews were hers and she loved them very deeply. Shirley was preceded in death by her husband, Bobby Dee Johnson (son of Aaron Zee and Ira Rea Meek Johnson); her parents, Tom and Gladys Barnes; her daughter, Theresa Gayle, and a great granddaughter Brenna Gayle Brower. Left to honor her memory is her daughter Sherry Wright (John) and her son Bobby Johnson Jr., (Lisa), 6 grandchildren: John Wright, Jr., Ami Edwards Smith (Jonathan), Angela Edwards Brower (Dennis Rainey), Amanda Wright Bond (David), Wesley Johnson and Logan Johnson; 7 great-great grandchildren: Kevin Wright, Carmen Wright Pedersen (Danial), Jason Brower, Jr., Cody Lewis (Cecily), Cameron Smith, Joshua Brower, Eli Smith; 5+great-great-great grandchildren: Alexis Pedersen, Bianna May Brower, Miles Pederson, Lakely Steadman, Lachlar Steadman and Baby Lewis due in May. Also, her siblings, Junell Clausel Moore, Peggy Roach, and Bobby Barnes (Betty); Bobby Dee’s siblings: Linda Chambers, Nancy Adams (Bobby), Robert (Sue), Wayne (Shirley), Donnie (Sherri), and Doyle (Helen), and a host of nieces and nephews.

During the early hours of Monday, March 1, 2021 Shirley Jean Johnson joined the love of her life. Bobby Dee Johnson, in Heaven. Shirley was born in McNairy County, and was the 2nd child of James Thomas and Gladys Euwell Moore Barnes. Bobby... View Obituary & Service Information

The family of Shirley Jean Johnson created this Life Tributes page to make it easy to share your memories.