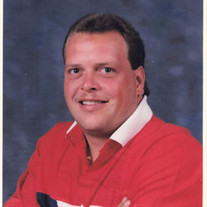 Stacy E. Hall was born August 5, 1968 in Nashville, TN the son of the late James (Jim) and Frankie Harville Hall. He lived in Nashville from birth to 18 years of age. Stacy worked for South Central Correctional Facility, Tool Products and RGIS. He was baptized on Sunday, July 12, 2015 at Solitude Freewill Baptist church and became a member on April 10, 2016. He enjoyed fishing, hunting, grilling out, boating, and spending time with his four grandchildren. Mr. Hall departed this life on April 20, 2021 in Adamsville, Tennessee at the age of 52 Years, 8 Months, 15 Days. He is survived by two daughters, Ashley Hall of Savannah, TN, Jessica Farley and husband Justin of Gallatin, TN; mother, Frankie Hall of Adamsville, TN; four grandchildren, Maddox and Millie Kate Farley both of Gallatin, TN, Dresden and Sydney Easter of Savannah, TN; and a host of extended family and friends.

The family of Stacy E. Hall created this Life Tributes page to make it easy to share your memories.

Send flowers to the Hall family.