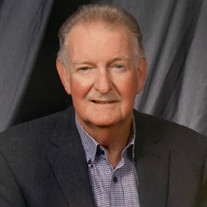 Teddy Maurice Walker, age 74, from Counce, Tennessee met Jesus on January 29, 2022 from complications arising several weeks after an aneurism surgery. Ted was born on May 15, 1947 in Magee, Mississippi, the oldest child of W.F. and Bernice Walker who welcomed him into Heaven. Leaving behind a loving wife of 53 years, Pat Walker and a son, Lance Walker (wife Stacie) with 2 grandsons, Cole and Cort Walker (wives Sarah and Meg), and soon to arrive great grandchild Cooper, all of whom he absolutely adored. He also leaves behind 3 brothers and 3 sisters, Donald Walker, Janice Golden, Kathy Wright, Bobby Walker, Billy Walker, and Lisa Evans and was always so proud of his family. As a young man, Ted grew up on a farm in South Mississippi and learned to work hard and love the outdoors at an early age. His parents also made sure he was involved in church and Ted grew to love the Lord at an early age and was teaching Sunday school classes when he was in high school to other kids his age (where he met Pat). Hunting and fishing were passions of his as were playing many sports, especially basketball. Immediately after graduating high school and starting college, Ted was drafted in 1968 into the Army to serve his country in Vietnam. Ted was dating Pat at the time and they were married before he shipped overseas. While serving his country overseas, Ted received many accommodations for courage and bravery and ultimately received a purple heart for wounds obtained on the battlefield which affected his health all thru his life, getting more life threatening toward the end. His growing up and time spent serving our country directly defined his life. His "hard work ethic" and "never quit" attitude was just who Ted was. Whether it was at his job, in a fishing tournament, teaching a Sunday school class, or taking care of his family, there was no 2nd place in his mind and failure was not an option. He lived life with a passion and fire that has been passed on to his next generations, but he stressed to never lose sight of priorities, leading with Faith and Family. Ted's request is that in lieu of flowers, any memorials be made to the Riverview Baptist Church Building Fund in Savannah, Tennessee. I have fought the good fight, I have finished the race, I have kept the faith. 2 Timothy 4:7

Teddy Maurice Walker, age 74, from Counce, Tennessee met Jesus on January 29, 2022 from complications arising several weeks after an aneurism surgery. Ted was born on May 15, 1947 in Magee, Mississippi, the oldest child of W.F. and Bernice... View Obituary & Service Information

The family of Ted Walker created this Life Tributes page to make it easy to share your memories.