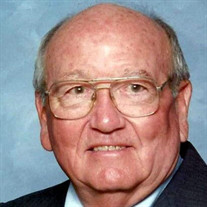 It is with great sadness that we announce the passing of Thomas Long Morris, age 90 years and 8 days, of Adamsville, TN. Tommy, as he was known by friends and family, passed away peacefully on Saturday, April 9, 2022 at Sanctuary Hospice in Tupelo, MS. Tommy was born in Selmer, TN on April 1, 1932 to TL "Doc" Morris and Clyde Long Morris of Adamsville, TN. Affectionately known as "Goat," Tommy graduated from Adamsville High School in 1950. He loved sports and was captain of the basketball team during his senior year and was an avid golfer later in life. After graduation and while working as a bulldozer operator for Mid South Construction Company, Tommy was drafted into the United States Army. He served 16 months in Korea during the Korean Conflict where his deep patriotism began. He was awarded the Korean Service Medal in 2013. After his service to our country, he returned to the area and worked for Garan Incorporated in the maintenance department. Being a good mechanic, he later opened a service station on Main Street in Adamsville and then a heating and air conditioning company. Tommy was a great entrepreneur and owned and operated the Morris Superette, Chadwick's Restaurant, and Morris Construction Company. He built what was known as the Morris Mini Mall on East Main Street where his restaurant and construction company were located for many years. Tommy, being very patriotic and outspoken, began his career in politics in the 1970s when he successfully ran for city commissioner and was re-elected for several terms. That led to him running for the mayorship of Adamsville in 2001. Tommy served as mayor for two consecutive terms. In 1998, he was united in marriage to Nancy Wagoner (Prather) in a private ceremony in Nashville and they made their home in Adamsville on Tanyard Lake. Tommy and Nancy attended church at Adamsville First Baptist. On April 8, 2022 he surrendered his life to the Lord and was baptized while in hospice care. Tommy was a people person and loved children especially his grandchildren. He liked to pick at people and always had a joke or funny story to tell. He liked to give nicknames to his friends and family and loved his own nickname of "Goat" so much that he has a license plate of that name on his Ford truck. Tommy is survived by his wife, Nancy Morris of Adamsville, TN; his sister, Rose Crunk of Savannah, TN; his son, Eddie Morris of Savannah, TN; his daughter, Ramona Morris of Ft. Oglethorpe, GA; his stepsons, Lynn Prather and wife Cathy of the Lawton Community and Ryan Prather of Tuscaloosa, AL; his grandchildren, Dee Morris and wife Rachel of Savannah, TN and Tommy Morris of Savannah, TN; his great grandchildren, Abbie and Libbie Morris and JP and Jenna Morris all of Savannah, TN; his step grandchildren, Eli Prather and wife Victoria of Jackson, TN and Olivia Waters and husband Zach of Selmer, TN; his nephews, Jimmy John Young and wife Pam of Adamsville, TN and Kenny Walker; his niece, LuAnn Walker and children of Adamsville, TN. Preceding him in death were his parents, Doc and Clyde Morris; infant sister, Judy Morris; sister, Ida Lou Walker and her husband Kenneth; brother-in-law, Charles Crunk. Tommy was a very caring person and took sisters, Tammy Garrison Hollingsworth and Christy Burkeen Allen as honorary children after their mother passed. Tommy will be deeply missed by his family and friends. In lieu of flowers, the family asks that donations be made to Sanctuary Hospice House, 5159 West Main Street, Tupleo, MS 38801 where Tommy's last days were spent with loving care.

It is with great sadness that we announce the passing of Thomas Long Morris, age 90 years and 8 days, of Adamsville, TN. Tommy, as he was known by friends and family, passed away peacefully on Saturday, April 9, 2022 at Sanctuary Hospice in... View Obituary & Service Information

The family of Thomas (Tommy) Long Morris created this Life Tributes page to make it easy to share your memories.

It is with great sadness that we announce the passing of Thomas...

Send flowers to the Morris family.