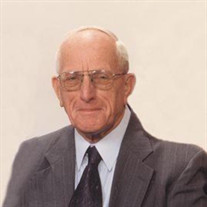 Waymon Morris, age 95, passed away at his home on August 5, 2021. He was born on September 23, 1925 in Henderson County, the son of the late W. F. (Famous) and Mae Washburn Morris. He was raised in the Rhodes Town area of Henderson County and attended school there. He was married on June 2, 1951 to Faye Tucker, and they initially made their home in Pekin, Illinois where he worked for Caterpillar. In 1954, they returned to the Roby community of Chester County where they continued to live today. He drove a school bus for the Chester County Board of Education from 1954 until 1977. He also worked at Rhodes Service Station from 1954 until 1970. He then began working at Henson Ford Tractor at the parts counter until he retired from there in the late 1990s. He loved his years at the parts counter where customers and co-workers became family. Waymon is survived by his wife of 70 years, Faye (Tucker) Morris, of Enville, TN; one daughter, Phyllis (Mike) LeCornu, of Henderson, TN; one granddaughter, Ashley Pugh, of Enville, TN; and one sister, Lounell Grissom, of Huron, TN in addition to other family members and friends. He was preceded in death by his daughter, Christie Pugh on January 2, 2021, his parents, and one brother, Leon Morris. He was a member of Shiloh Baptist Church of Reagan, TN, where he served as a deacon and Sunday School Superintendent for decades. He loved his church and church family dearly. Funeral services will be 2:00 PM Sunday, August 8th at Shackelford Funeral Directors – Crook Avenue with Bro. Sam McAdams and Ashley Pugh officiating. Burial will follow in Roby Cemetery. The family will receive friends at Crook Avenue 5:00 PM until 8:00 PM on Saturday, and beginning at 11:00 AM on Sunday until service time. In lieu of flowers, his family encourages you to consider donating in his memory to Shiloh Baptist Church or another faith-based ministry of your choice. The family requests that facial coverings be worn.

Waymon Morris, age 95, passed away at his home on August 5, 2021. He was born on September 23, 1925 in Henderson County, the son of the late W. F. (Famous) and Mae Washburn Morris. He was raised in the Rhodes Town area of Henderson County and... View Obituary & Service Information

The family of Waymon Morris of Enville, TN created this Life Tributes page to make it easy to share your memories.

Send flowers to the Morris family.