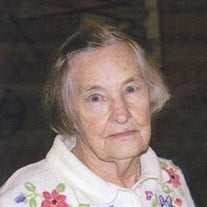 BARBARA NASH Pinson, TN: Barbara L. Powell Nash age 85, passed away October 22, 2021 at Jackson Madison County General Hospital. She was born February 24, 1936 in Vivian, West Virginia, the daughter of the late Robert and Martha Malliote Powell. She grew up in Jacks Creek and attended school in Chester County; she attended Jackson State Community College and earned a degree in Computer Processing. She married J.R. ‘Shorty’ Nash in 1952. They made their home in Pinson. He preceded her in death in March of 2021. She worked at Salant & Salant and then at Walmart in Jackson for twenty-five years, retiring as manager of the Sewing and Fabric Department. She loved sewing, gardening, and above all, spending time with her great grandchildren. Mrs. Nash is survived by two sons, James Nash, Jr. and wife Drema of Kenton, TN and Terry Nash of Pinson, TN; a daughter, Susan Moore and husband Gary of Cedar Grove, TN; four grandchildren, Kim McBride of Lexington, Melanie Nash of Pinson, Leigh Ann Burnett (Jamie) of Finger and Terra Scudder (Billy) of Finger; seven great grandchildren; a brother, Charles Newsom of Henderson and two sisters, Jean Berry of Mantee, MS, Martha Combelic of Vancouver, Washington State and Patti Schwager of Snohomish, Washington. She was preceded in death by her parents, her husband and a brother, Richard Hill. Memorial services will be 11:00 AM Saturday, October 30th at Shackelford Funeral Directors – East Main Chapel. The family will receive friends at East Main Chapel beginning at 10 AM until service time at 11 AM Saturday. Shackelford Funeral Directors of Henderson 731-989-2624

The family of Barbara Nash of Pinson, TN created this Life Tributes page to make it easy to share your memories.

Send flowers to the Nash family.