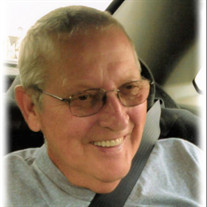 Billy Dennis departed this life on Saturday, April 16, 2022, at the age of 77 years, 3 months, and 18 days. He was born in Savannah, Tennessee, on December 29, 1944, the son of the late Ed and Swannie Grimes Dennis. On March 23, 1963, he was united in marriage to Winda Rich, who survives. Billy was a member of Mt. Hermon Baptist Church and Woodmen of the World. He loved tractors, gardening, tending his cows, and watching Westerns on TV. He had worked part-time at First Farmers CO-OP as a gas pump attendant and retired from Savannah Utility Department. In addition to his wife of 59 years, Winda Dennis of Savannah, Tennessee, Billy Joe is survived by his children, Eddie Dennis and Kim Hammock; grandchildren, Emily Hammock, Clark Dennis, and Matt Hammock and his wife Heather; a brother, Mike Dennis and his wife Diane; and sisters, Lucille Hosey and her husband Raymond, and Ruby Majors. Along with his parents, he was preceded in death by a brother, James "Pete" Dennis and a sister, Ella Linville.

The family of Billy Dennis created this Life Tributes page to make it easy to share your memories.

Send flowers to the Dennis family.