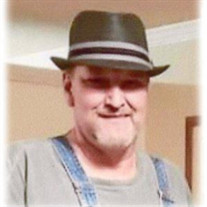 Billy Ray McClain of Waynesboro, TN was born on May 7, 1971 in Savannah, TN, the son of the late Arlie Odell and Iva Dean Sharp McClain. He departed this life on Wednesday, April 14, 2021 in Waynesboro, TN at the age of 49 Years, 11 Months,... View Obituary & Service Information

The family of Billy Ray McClain, Waynesboro, TN created this Life Tributes page to make it easy to share your memories.

Send flowers to the McClain family.