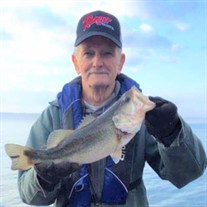 Billy "Pops" Williams was born on March 27, 1940 in McNairy County, Tennessee, the son of the late Loyd and Sarah Maude Hindman Williams. On May 14, 1960, he was united in marriage to Mary Ann Moore, who survives. Mr. Williams worked for Gearhert-Owens... View Obituary & Service Information

The family of Billy "Pops" Williams created this Life Tributes page to make it easy to share your memories.