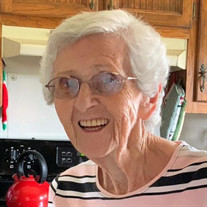 Charlene Hawkins was born July 10, 1933 in Selmer, TN the daughter of the late Hughie Lafayette and Beulah Priscilla Isbell Wilson. She was united in marriage to Sidney Hershel Hawkins on December 24, 1947. Mr. Hawkins preceded her in death on February 9, 2019, following 71 years of marriage. Mrs. Hawkins retired from Selmer Wal-Mart as a greeter, where she worked for 20 plus years. She also worked in quality control for Desa Manufacturing in Park Forest, IL, retiring after 15 plus years. Some of her other jobs included working as a group home manager for the McNairy County Developmental Center, Brown Shoe Company, and numerous restaurants. Mrs. Hawkins enjoyed vegetable gardening, canning, caring for her roses, crocheting, reading, collecting, and traveling. She loved people and was always ready to extend a helping hand to anyone in need. If she was your friend, she was a friend for life. Her family was her source of pride (along with her roses). She loved music, especially when her children were singing. Mrs. Hawkins was an active member of the Bethel Springs Community Church. Mrs. Hawkins departed this life on August 21, 2021 at her home in Selmer, Tennessee at the age of 88 Years, 1 Month, 11 Days. She is survived by two daughters, Gail Schultz and husband Larry of Selmer, TN and Christina Hawkins of Nashville, TN; a son, Lynn Hawkins and wife Sherry of Farmer City, IL; four grandchildren: Jeff Schultz and wife Rita of Medina, TN, Jason Schultz and wife Jean of Jackson, TN, Matt Hawkins and wife Valerie of Normal, IL, and Adam Hawkins and wife Heather of Bloomington, IL; six great-grandchildren: Julianna Schultz, Jenna Schultz, Harper Hawkins, Will Hawkins, Jay Hawkins, and Brooks Hawkins; a brother, Douglas Wilson and wife Lou of Selmer, TN; and many extended family and friends. In addition to her husband and parents, Mrs. Hawkins was preceded in death by a sister, Amy (Wilson) Tull, and her step-mother, Beulah M. Wilson. In lieu of flowers the family requests memorials to Bethel Springs Community Church, 3886 Main St., Bethel Springs, TN 38315.

Charlene Hawkins was born July 10, 1933 in Selmer, TN the daughter of the late Hughie Lafayette and Beulah Priscilla Isbell Wilson. She was united in marriage to Sidney Hershel Hawkins on December 24, 1947. Mr. Hawkins preceded her in death... View Obituary & Service Information

The family of Charlene Hawkins of Selmer, TN created this Life Tributes page to make it easy to share your memories.