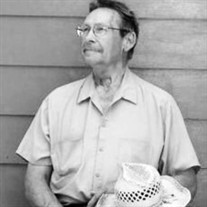 Mr. Gatlin passed away at his home on Thursday morning, June 18, 2020. Born in a log cabin in Stewart County near Tharpe, TN, he was the son of the late Bernard Hill Gatlin and Julia Evelyn Spiceland Gatlin. The towns of Tharpe, TN, Model, TN and Golden Pond, KY were abandoned when the Land Between the Lakes project was initiated. Later, logs from his family's home were used by the Boy Scouts of America to build cabins near Nashville. Mr. Gatlin graduated from Stewart County High School and later moved to Hardeman County in 1959. He married Margaret Wiley Gatlin and she preceded him in death on May 22, 2004. Employed as head of maintenance for over 28 years by Bolivar General Hospital, he was a talented electrician, plumber and HVAC man who used his talents throughout his life particularly in helping build Dixie Hills Baptist Church. David was a long-time member of Dixie Hills formerly serving as Deacon, Sunday School Teacher, Choir Member and Director. His love for the Lord and the church were recognized when he was honored with "David Gatlin Day" by his church family. He was also active in the Hardeman County Baptist Association and their disaster relief program. Mr. Gatlin traveled all over the USA helping construct churches and was deployed to New York City following the 9/11 disaster. A man who loved to read his Bible, he joined the Masons in the early 1960's attaining 32nd degree Scottish Rite status. He was a member of Gideons International and in his spare time enjoyed fishing, camping and tinkering with all types of machinery. He is survived by two daughters, Karen Gatlin of Bolivar and Cindy Renee Gatlin of Memphis; one son, Randy Gatlin and his wife, Melissa, of Bolivar; one brother, Billy Gatlin of Greenbrier, TN; three grandchildren, Amanda Estes and her husband, Wesley, Sara Gatlin and Brennan Gatlin; two great-grandchildren, Adeline and Mollie Estes; and several nieces and nephews. In addition to his wife and parents, Mr. Gatlin was preceded in death by a sister, Lillian Gray Stanley. Memorials should be sent to the Gideons Internationl [https://www.gideons.org/donate] While visiting or attending services for Mr. Gatlin, please consider the following guidelines: * Maintain 6 feet between yourself and the next closest person; * Refrain from hugs and handshakes; * When you sneeze or cough, use your elbow to cover your nose and mouth; * Wash your hands often; * Avoid touching your face; and * Minimize time spent in places where people gather. Thank you for your thoughtfulness and consideration.

Mr. Gatlin passed away at his home on Thursday morning, June 18, 2020. Born in a log cabin in Stewart County near Tharpe, TN, he was the son of the late Bernard Hill Gatlin and Julia Evelyn Spiceland Gatlin. The towns of Tharpe, TN, Model,... View Obituary & Service Information

The family of David Gatlin created this Life Tributes page to make it easy to share your memories.

Mr. Gatlin passed away at his home on Thursday morning, June...

Send flowers to the Gatlin family.