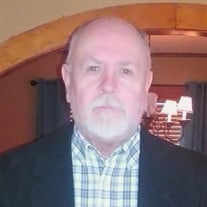 David Wayne Newman, 71 of Bolivar, TN, passed from this life Wednesday, November 4, 2020 at Bolivar General Hospital. Mr. Newman was born April 29, 1949 to the late Edward Green and Vivian Joyce Crum Newman in Brownfield, MS. He served our country in the US Army receiving the Commendation Medal in 1970-1971, serving two stints in VIetnam. He was a graduate of International Detective Training School in 1973 and was in the 98% of his class. Mostly known as an accomplished musician, he played guitar, mandolin, and bass guitar, playing with Johnny Newman and the Affairs and his band Stillwater. He performed often with his family and travelled with his late wife Kathy Illiana Newman in the early 2000's. He was an ordained minister and considered himself non-denominational. Other than about 10 years in Parsons, he lived most of his life in Hardeman County. Survivors include a son, David Hilliard of Atwood, TN; a daughter, Cheryl Ann Dawson of Corinth, MS; 4 sisters, Deanna Sue Howell and husband Frankie of Bolivar, Brenda Joan Bivens and husband Kenny of Jackson, Paula Annette Lowry and husband Gary of Bartlett, and Tammy Roxanne Kemper and husband Alan of Milan; 2 brothers Terry Frank Newman and wife Deborah of Adamsville and Joel Anthony Newman of Bolivar. In addition to his parents and wife Kathy, he was preceded in death by his brother, Johnny Newman and maternal grandmother, Maude Wilbanks. While visiting or attending services for Mr. Newman, please consider the following guidelines: * Maintain 6 feet between yourself and the next closest person; * Refrain from hugs and handshakes; * When you sneeze or cough, use your elbow to cover your nose and mouth; * Wash your hands often; * Avoid touching your face; and * Minimize time spent in places where people gather. Thank you for your consideration.

The family of David Wayne Newman created this Life Tributes page to make it easy to share your memories.

David Wayne Newman, 71 of Bolivar, TN, passed from this life...

Send flowers to the Newman family.