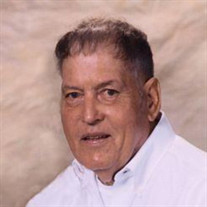 Milledgeville, TN: Dennis Ray Harwell, age 73 of Milledgeville, TN died at his home Friday morning, October 30, 2020. He was born in Chester County, TN on April 18, 1947 son of the late David Graper and Malissa Kathryn Cagle Harwell. He grew up in Milledgeville and was a 1965 graduate of Chester County High School. Upon graduation he went to work for TVA in Mayfield, KY but was drafted the next year into the US Army in 1966 during the Vietnam War. He served two years and was a crew chief with the 205th Support and Attack Helicopter Company. After his term in the army he returned home and farmed with his father, which he loved doing. He met and later married Linda McDaniel on March 10, 1972 and they made their home in Milledgeville. He always liked to tinker with lawn mowers and motors. He especially loved his 1965 Red Chevelle. He was a loving husband and father. He is survived by his wife Linda Harwell, daughter Sabrina Griswell and grandson Oakley Griswell all of Milledgeville. He is also survived by a sister Katie Bethune of Paris, TN and a host of nephews and nieces that he loved greatly. In addition to his parents he was preceded in death by two brothers, Carneil and Jerry Harwell. The family would like to give a special Thank You to Hospice of West Tennessee, Dr. Eddie Koonce, Clara Barrow NP, Michele Menzie, Stephanie Hill, Alysia Dillard, James Watford and Rhonda Hunt, FNP. Funeral Services will be 11:00 AM Wednesday, Nov. 4, at Shackelford Funeral Directors of Henderson’s Crook Ave. Chapel with Dr. Joey Edwards and Gene Hanna officiating. Burial will be in Milledgeville Cemetery. The family will receive friends at Crook Ave. from 9:00 am to 11:00 AM Wednesday. The family requests that visitors please wear facial coverings.

The family of Dennis Harwell -Milledgeville created this Life Tributes page to make it easy to share your memories.

Send flowers to the Harwell family.