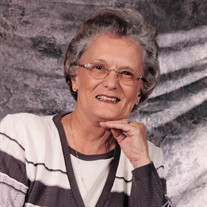 Doris Harper Phelps was born November 23, 1931 in Flat Rock, KY the daughter of the late C. C. and Mary Dee Beavers Harper. She was united in marriage to Earl Phelps on March 23, 1951. Rev. Phelps preceded her in death on April 21, 2016, following 65 years of marriage. Mrs. Phelps was a 1949 graduate of Fredonia High School in Fredonia, KY. Her first job was that of teacher in a one room schoolhouse in Flat Rock, KY. She retired from USAA Insurance, having worked at the home office in San Antonio, TX before transferring to Tampa, FL. She also worked as a bank teller for First State Bank in Covington, TN. As a young mother Mrs. Phelps sewed all her daughter's clothes, did crafting and woodworking with her husband, and embroidered multiple items for the public. She was an avid Adamsville Cardinals sports fan, and was always ready to go if there was a trip to be taken. Mrs. Phelps was a faithful minister's wife who followed her husband wherever he was appointed, and was a lifetime member of the Cumberland Presbyterian Church. Mrs. Phelps departed this life on May 9, 2022 in Selmer, Tennessee at the age of 90 Years, 5 Months, 16 Days. She is survived by three daughters: Cynthia Gabriel of Adamsville, TN, Cathy Bowen and husband Rickey of Guys, TN, and Christie Phelps of Adamsville, TN; five grandchildren: Nicole Spiers of Denver, CO, Mica Tinsley of Savannah, TN, Jordan Tinsley and wife Keisha of Savannah, TN, Drew Martin and Jake Martin, both of Stantonville, TN; four great-grandchildren: Hunter Stricklin, Kinley Wilson, Charlie Tinsley, and Hadley-Ann Harper Tinsley, all of Savannah, TN; two sisters, Linda Phelps and husband Bill of Fredonia, KY and Patty Simpson and husband Gary of Louisville, KY; a brother, Jimmy Harper and wife Linda of Louisville, KY; and many nieces, nephews, extended family and friends. In addition to her husband and parents, Mrs. Phelps was preceded in death by a grandchild, Christopher Spiers. Memorials may be made to the American Heart Association.

Doris Harper Phelps was born November 23, 1931 in Flat Rock, KY the daughter of the late C. C. and Mary Dee Beavers Harper. She was united in marriage to Earl Phelps on March 23, 1951. Rev. Phelps preceded her in death on April 21, 2016, following... View Obituary & Service Information

The family of Doris Harper Phelps of Stantonville, TN created this Life Tributes page to make it easy to share your memories.

Send flowers to the Phelps family.