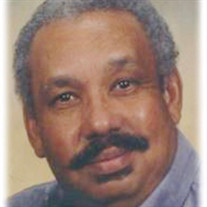 Frank Hollis Taylor departed this life on Tuesday, January 19, 2021, at the age of 78 years and 10 months. He was born in Savannah, Tennessee, on March 19, 1942, the son of the late Jim Dan and Mattie Pearl Tucker Taylor. On September 12, 1964, he was united in marriage to Carolyn Bailey, who preceded him in death on December 20, 2018. Frank retired from Tennessee Valley Authority as a Biologist, after 25 years with the company. He had previously been a teacher at Dunbar School in Savannah, Tennessee. Frank was a member of the Savannah Church of Christ and was a coordinator of the local NAACP chapter. He loved the Tennessee Titans football and Memphis Grizzlies basketball. Frank is survived by his sons, Hollis Taylor and his wife Eleanor of Savannah, Tennessee, and Malcolm Taylor of LaVergne, Tennessee; grandchildren, Kelsey Abel and Dakari Muse, both of Nashville, Tennessee, Antray Morrow, Antrean Morrow, and Hollis A. Taylor, all of Savannah, Tennessee; great grandchild, Kinsley Abel of Nashville, Tennessee; brothers, Nathaniel Taylor and his wife Ellen of Germany; and Emanuel Taylor of Savannah, Tennessee; and sisters, Mary Jordan and her husband Kenneth of Opelika, Alabama, Virginia Taylor and Dorothy Welch, both of Chicago, Illinois, and Shirley Tall of Nashville, Tennessee. In addition to his parents and wife, Frank was preceded in death by his daughter, Patty Taylor, and brothers, James E. Taylor and Billy Malcolm Taylor.

The family of Frank Hollis Taylor created this Life Tributes page to make it easy to share your memories.

Send flowers to the Taylor family.